Published in Your Sinclair #82 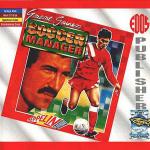 Y'know, Spec-chums, it's a confusing world we live in. Robert Maxwell, were-they-or-weren't-they-banned drugs at the Olympics, 'friendly fire', the painted-on crowd at one end of Arsenal's ground - all these things, and lots more besides, are a wee bit confusing. As if that wasn't enough, though, there are some people out there who try to make things even more confusing with a cunning use of words.

You know the kind of thing I mean - 'unbelievable arcade action' translating as 'horrible tedious monochrome crap with a big muitlioad, or 'the best game I've ever played in my entire life, translating as 'I' own the company, please buy this and make me lots of money' So in the name of global understanding, I'm going to take you by the hand and lead you through the literary minefield that is the world of games. First though, I'm going to need the help of a volunteer from the audience. Yes, sir, step right this way! And your name? Thank you. Ladies and gentlemen, let's hear it for Mr Graeme Souness Soccer Manager! (pause for cheering).

Okay, let's take this from the very top and start with the front of the box. 'Graeme Souness Soccer Manager'. Well, yes, it's got a picture of Graeme Souness on it. Beyond that, though, the influence of Graeme Souness on the game is distinctly conspicuous by its absence. You can manage any team you you like (it doesn't have to be Graeme's Liverpool), and if you do choose his side it won't have any of the players you might be expecting. Perhaps the title Generic Football Manager Game With a Quick Licence Stuck Totally Gratuitously On The Top would be more appropriate.

Over to the back now, and the first words we come across are 'a devastatingly accurate simulation of the trials and tribulations of taking a football team to the top'. Yeah, right. The day anyone has a heart attack brought on by the stress of playing with this unremarkable, simplistic and repetitive collection of menu screens is the day the world turns day-glo and we all start calling each other Ethel Merman. I think the phrase we want here is 'a devastatingly accurate simulation of a particularly boring day at an accountant's rather uninteresting office.'

Down a bit past some more guff and we come to a bit about 'large animated icons keep you in total control of the running of a Professional Football League team'. If any of the icons in this game are in any way animated, I must have blinked and missed something, and if this really covers everything involved in the running of a football team then I'm surprised they don't get primary school children to do the job - if you can count to thirteen, you can play Graeme Souness Soccer Manager. So let's revise that to 'Moderately big completely static icons let you do nearly as many things as you could in the original Football Manager which came out nine, that's NINE, years ago.'

Let's try inside the box, where it tells you about the 'Gameplay'. Apparently the game can be controlled by joystick or keyboard, and the instructions list a set of 'de-fault' keys which kinds of implies some redefinability. Well, I tried every joystick combination I could think of and did everything to redefine the key possible, but the only way I could control this game by anything other than the listed keys was to take all the plastic key tops off my keyboard and put them back on in a different order. Clearly the correct wording in this situation would have been 'The game can be controlled by these keys here, and if you don't like it tough blimmin' luck.''

I could go on about the 'animated match highlights' which consist of a total of four different attacking moves carried out by players who all look exactly the same, whichever team they're supposed to be playing for, on about the 'sophisticated team/player data' which really means 'it tells you the name and age of each player and how many goals they've scored'. I could natter about the 'whole host of other excellent features' which translates directly as 'absolutely no excellent features at all' or simply on about how this game is less involved, less sophisticated, less enjoyable and inferior in every single identifiable way to the original Football Manager, far less any of the much better games which have come after it (of which, incidentally, I reckon the thoroughly spanky Football Manager 2 is still just about the best).

Despite what I said at the start of the review, there's really nothing at all confusing about this game. It's complete crap. Simple as that.

Uppers: Um, um, um... well, it doesn't have Graeme Souness in it anywhere, which has to be a bit of a bonus if you think about it. Downers: ...but then it doesn't really have anything in it full stop. Nowhere near as good as any other Speccy footy management game. Graeme Souness Soccer Manager has absolutely nothing going for it. It's a load of old crap. Basically.

Graeme Souness Soccer Manager has absolutely nothing going for it. It's nowhere near as good as any other Speccy footy management game. It's a load of old crap.