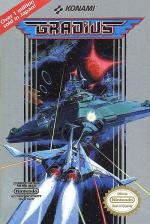 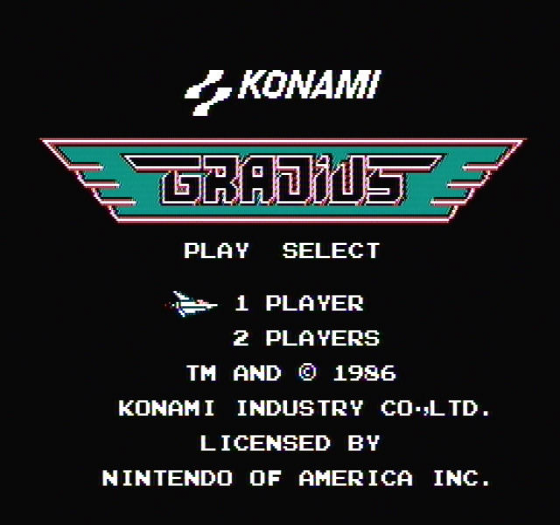 Konami's Gradius, or Nemesis as it's better known in the UK, appeared in 1985 and is notable for being the first arcade game with power-up weaponry. The Nintendo translation has all the features of the original machine, and is far superior to the computer versions that were released by Konami a few years ago.

The objective of this horizontally scrolling shoot-'em-up is to conquer the evil Bacterion empire that's threatening the galaxy. It's just you and your trusty Warp Rattler space craft against seven levels of hostile and heavily armed alien forces.

The mission starts on a volcanic planet, and the Rattler flies in and blasts at the fleets of Bacterion crafts that form the primary attack force of the empire. When an attack wave of craft is destroyed, an icon is left behind which is picked up to advance the power-up weapons bar at the bottom of the screen. There are six features in all - speed-up, missile, double-fire, laser-option and force field, and any can be chosen if enough icons have been collected. All the weapons are self explanatory, but if you're wondering, the option is a ball which floats behind the Rattler and emulates all its moves and firepower - up to two can be collected with pretty devastating results. 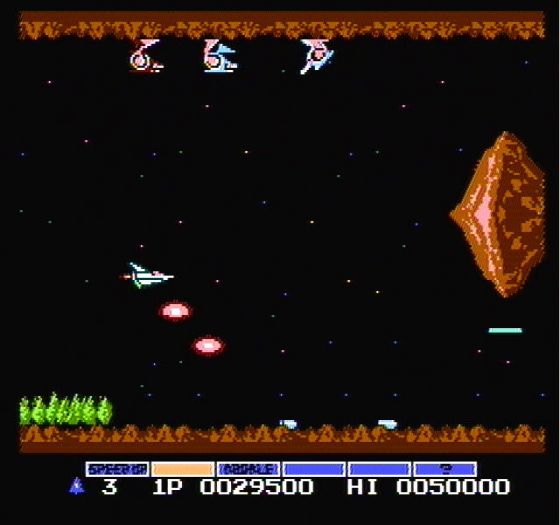 As with most shoot-'em-ups of this type, the end of each level is guarded by a giant mothership which is destroyed to go onto the next stage. The levels are varied, and range from volcanic planets (complete with boulder-spitting mountains) through a stage-packed with rocks upon which sit Easter Island statues that spit glowing rings at the Rattler to the inside of the Bacterion fortress, which is bristling with gun emplacements and robot defence networks.

Gradius is a thumping good arcade conversion, and combines good looks and brilliant top-notch shoot-'em-up. The gameplay is very challenging and addictive, and kept me coming back to the Nintendo time and time again to see whether I could get just a little bit further.

The graphics are superb, and fully recreate the look of the original machine, and apart from the very occasional flicker, everything moves smoothly - even when the Rattler has a full complement of weapons. Sound is also faithful to the coin-op, with good background music and effects.

As well as packing in all the features of the coin-op, Konami have added plenty of their own in the form of cheats and hidden bonuses. On each level it's possible to get an extra man and 5,000 bonus points by completing a set manoeuvre, and there are also a myriad of other secret bonuses and warps which I'll be revealing in Playmasters in the coming months.

Nintendo blasters are rare beasts, so don't let this one escape!

Don't let this beauty escape you...! As well as packing in all the features of the coin-op, Konami have added plenty of their own in the form of cheats and hidden bonuses. 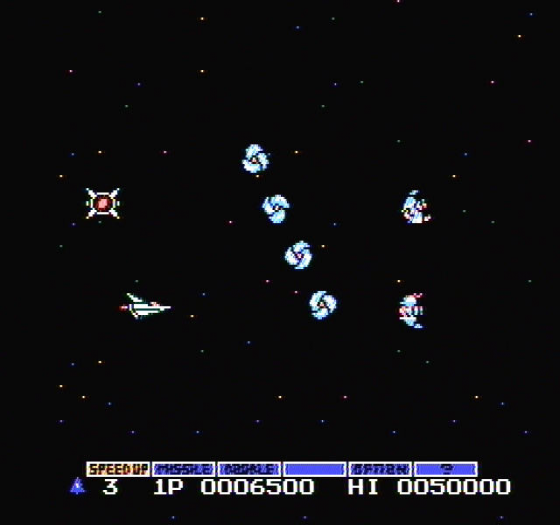