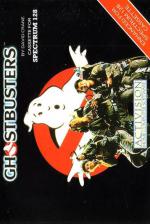 Ghostbusters again. Impossible but true. The final version (Activision promises) of the hottest title of yesteryear is out about now - for the Spectrum 128.

For me, Ghostbusters was never a game, always a title screen. When the C64 version first turned up nobody could believe the music, it was funky. I watched those opening credits over and over again as the little dot bounced over the words to the song. The game I could always do without. For obvious reasons the Spectrum version was a bit of a let down.

On the Spectrum 128 things are different. Back comes the bouncing blob, the words, and yes, FUNKY MUSIC. The three-channel sound chip squeaks its little heart out and it's good, not brilliant but good. You could even dance to it.

The game is the same as ever - broadly a management style activity with arcade side effects. Equip your ghostbusting mobile, check the map for ghost activity, trap the ghosts and earn money for more car gear. No change in the way objects gleefully change colour, the graphics still look a bit unprofessional and I always though the plot was pretty tedious anyway.

For those who have the 128 this game probably shows off its new improved sound abilities a well as, if not better than, anything else. The game itself is no better than a budget title, so at least two of the stars are for the soundtrack and that bouncing blob.

Sounds great, looks very average. Best seen as a demo of the 128s sound chip. As such it's expensive.

Sounds great, looks very average. Best seen as a demo of the 128's sound chip. As such it's expensive.