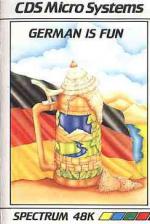 This is one of a series which offers you the chance of a painless introduction to a language in the privacy of your own home.

The cassette has two distinct elements. Firstly you learn a vocabulary through pictures and words on screen and secondly you can synchronise the other side to hear the words as well. This audio/visual approach gives it an edge on those tape-only courses but the disadvantage is in the relatively small vocabulary it teaches you.

There are six screens, each built up as the words are introduced. One element is usually animated; for example, the beachball bouncing at the seaside. The drawings are very good and colourful with an option to take them singly or one after the other in a demonstration mode. Once you select your picture, you may choose to have the German and English text appear as the items are drawn or you may test yourself. Mistakes are noted by a counter but if you get stuck, typing a "?" will give you the next letter.

The pictures involve a house, the countryside, seaside, a cafe, a street and a school. These represent the basic vocabulary needed, as the cassette inlay suggests, for "the student, holiday maker or traveller".

There is a phrases only mode which helps in making sense of what you have learned. In addition there are sections dealing with numbers and telling the time.

This is a program which is inventive in its approach and versatile enough to cope with the beginnner's bewilderment. Recommended as a very simple introduction to the language.

Recommended as a very simple introduction to the language.