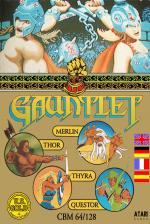 Trapped in a world of hundreds of dungeons are our four valiant heroes: Merlin the Wizard, Questor the Elf, Thyra the Valkyrie and Thor the Warrior. They can't escape from this realm of mazes and can only move from dungeon to dungeon, staying alive by scavenging foo, potions and magic charms whenever the opportunity arises.

Either one or two players can play, each taking the role of their favourite of the four characters. A dungeon is roughly two by two screens in area and it scrolls as the player(s) explore. Neither player can leave the screen without the other following, consequently the two have to work together if they are to move around the dungeon successfully.

The intrepid adventurers aren't alone in this world of rock and stone. They are kept company by hordes of beastly creatures who don't like intruders. Consequently anything they consider to be remotely alien to their environment is leapt upon and attacked with much gusto and relish. There are six breeds of marauding meanies: suicidal ghosts; baton-wielding grunts; fire-spitting demons; rock-throwing lobbers, disappearing sorcerers and finally, the most fearsome of opponents - Death, these horrors try to home in on whose touch spells doom. All of your character, attempting to engage them in hand-to-hand combat. This fighting diminishes your character's health energy, as shown numerically at the bottom of the screen. If this energy is allowed to reach zero the character dies, however this can be prevented by eating the food which is scattered around the dungeons in limited amounts (careful though, some of this good is poisoned and only serves to make your character weaker).

Hand-to-hand combat isn't the only way of fighting: each character has the ability to destroy the baddies by use of their personal weapons (these weapons also destroy the generator buildings which produce the vile creatures). This method of destruction is very effective, and it ensures a much longer adventure.

Magic potions can also occasionally be found and picked up, when used they have a 'smart-bomb' effect, and evey denizen on screen is damaged or killed (the potion's effectiveness depends upon which character uses it). Some potions also yield special powers to the user, such as extra armour, fire-power or pick-up ability.

Each dungeon is made up of walls, the bulk of which are inpenetrable. However, some of the walls have special properties: some can only be opened if a character is carrying a key, others have to be destroyed and there is one type which can only be opened if a glowing trapdoor is found and run into. There are also tele-transporters which whisk your character to another part of the dungeon, and finally the exits which allow you to move from one dungeon to the next.

Unbelievable! All the features of the arcade game (including the original maze planet) have been packed into this incredible conversion. What really is stunning though, is the amount of action generated - you can have loads and loads of horrible denizens chasing after you!

I've never seen so many things chasing a main character, due t this the action gets pretty frenetic. I must confess that I like playing the game on my own, the multi-player option doesn't appeal as much - taking on the hordes of characters singlehanded is great fun and the action is non-stop.

The graphics are really great, although the sound could have been a lot better. The disk version is neat as it accesses the levels in a random manner. The cassette version is on a multi-load format and consequently the dungeons are in a set order, but this doesn't detract from the action in any way and the loading system isn't a chore to use. This is a truly brilliant program and shouldn't be missed at any cost.

Having never encountered Gauntlet in the arcades, I didn't really know what to expect from this conversion. To begin with it all looked a bit bland, with little more in the way of sound than the occasional jingle that plays when progressing from level to level.

However, Gauntlet's attraction is due mainly to its simplicity, and for that reason it's very playable. This simplicity means that anyone can enjoy it to a certain extent, whether proficient at the arcade game or not. However, I think playing it continually with only one player may eventually become slightly tedious but, having said that, it's infinitely more fun with someone else playing alongside you. I don't think I'm as awestruck as I was expecting to be, but it'll keep me happy - for the time being.

Gauntlet is without doubt the classic arcade game. Its popularity is due to the fact that it's essentially a simple game which anyone can get straight into, and, more importantly, it is something of a social event: the opportunity for a group of friends to have fun living out a fantasy together.

Money becomes a form of lifeforce, and since it is more expendable than blood it flows freely into the arcade machine, somehow generating a sense of 'being there'. This is where the computer conversion stumbles: gone is the incentive to do well because no money is being lost.

However, the social atmosphere hasn't been lost entirely during the process of conversion. The programmers have captured some of the feel of the arcade original and have produced a highly absorbing two player game - Gauntlet, however, isn't much fun on your own.

The graphics aren't exceptional, but they are convincing enough, especially when hundreds of nasties spew forth and fill the screen. Sound could have been put to better use though, as the spot FX are poor. There's no speech, but then, I wasn't expecting any...

Gaunlet isn't quite as good a conversion as it should have been, which is understandable in the graphics and sound department but not where gameplay is concerned. For some reason players can't push each other around, something which adds to the fun of the arcade original - especially on the screen which is full of exits.

Apart rrom a few bugs - the most irritating of which is when a player 'wraps' around the screen this does tend to screw up the proceedings somewhat - Guantlet is a competent and playable conversion which will appeal to fans of the arcade original.

Presentation 82%
Copious instructions, one or two player option, and an adequate loading system.

Graphics 90%
The different characters are all adequately defined and animated for their size, and the amount of things moving on screen is very impressive.

Lastability 92%
512 levels to explore, but the going can get a little tedious.

Value For Money 90%
A worthy purchase for Gauntlet junkies.