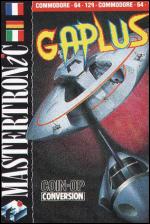 You thought wasp stings and midge bites were bad? Gaplus race of space insectoids is about to nibble through the fabric of the space-time continuum spelling doom and postal delays on a universal scale!

Before you lie 50 parsecs of Gaplus-infested galaxy. Amongst the swirling hordes which swoop around your astro-fighter, there are Mother Gapluses - when killed they drop a weapon upgrade capsule.

Catching a tracker beam lets you capture up to four drones to widen your firing pattern. Other capsules give you doubled fire-power or a cyclone accelerator - more of a decelerator really, as it stops Gapluses in their tracks for you to shoot them with ease.

I jus' lerv all those old-fashioned not very hi-tech coin-ops like Galaga, Galaxians and Gorf - Gaplus is pretty similar but it just doesn't strike me as being anywhere near as much fun. The graphics are bland, the sound is really boring and all that supposedly nostalgic gameplay simply lacks bite.

Sensible Software did a much better job with Galaxibirds - if you can still find a copy lying around somewhere, get that and save Gaplus for a really rainy day.

We've already seen a few games from ace Compunetters, but while they've all been good technically, the gameplay has always lacked substance.

When you put Ash and Dave, arguably the best demo-technicians on the 'Net, together with a good game, you get an excellent blast - and that's Gaplus! I was a little surprised that they hadn't done a better job of the game, because the sprites are bland, the sound is limited to a few jingles and there's even a glitch in the scrolling starfield!

Luckily, any poor first impressions these might create are shattered after only a few games, and I was soon fighting it out for top position on the score table.

Gaplus is really addictive and, for the price, you'd be stupid to miss it.

Sound 52%
The odd jingle and some pleasant sound effects.

Hookability 68%
Nothing special to provide instant attraction, but it grows on you after only a few games.

Lastability 72%
Plenty of great blasting fun to keep you occupied - for ages.