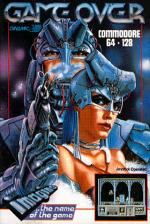 Arkos, Lieutenant of Queen Gremla's all-powerful army, has become disillusioned with his monarch's growing greed and cruelty, and has vowed to overthrow her.

Commencing in the deepest depths of the Planet Prison, Arkos' objective is to run and jump from left to right across twenty hazard-filled flick screens. Lifts take him to higher levels, and sometimes provide moving stepping stones to the next part of the landscape. Arkos can fall off a lift as long as there is solid ground to break his fall - but tumbling into void results in a loss of one of his three lives.

The dungeons are far from empty, and within seconds of the mission starting the air is filled with flying Guardian Robots which fire at the renegade soldier. Each hit sustained results in a loss of energy, displayed at the bottom of the screen as a diminishing bar.

For protection, the warrior carries 20 hand grenades and a blaster with unlimited rounds. Pressing the fire button rapidly activates the laser gun - keeping the button depressed launches an all-destroying grenade.

As he progresses through the environment, Arkos encounters red and white barrels. When these are destroyed (by three laser blasts), they reveal a mystery feature which is picked up when touched. These features include extra Grenades, an energy-replenishing Heart, a 'Pow Up' sign which increases his fire power and a protective Force Field offering limited protection from enemy fire. Occasionally a mine appears, blowing up the hero if accidentally collected.

After the prison chambers comes a slimy swamp, where far green monsters (not unlike Liddon in stature), emerge aggressively from the ground. If this marshy land is negotiated and screen 11 reached, a huge mud-gobbing monster appears and blocks the route. Shooting this disgusting fatty forty times rids it from the face of the planet, but quick action has to be taken before it's rapidly-spat death phlegm depletes the hero's energy.

More marshy land is endured before the nineteenth screen is reached. Here, three Giant Robots appear and have to be shot twenty times before they're turned to scrap.

After the clash with the robots comes a testing trip through the forest land to Gremla's Palace. Here, blaster and grenades are exchanged for a 25 round laser cannon. Arkos takes on fireball shooting Leiser-Freisers and jumping Kaikas before reaching the Giant Guardian. This monster soaks up 75 well-aimed shots before leaving his post. With that destroyed, Arkos is free to complete his assassination mission.

Once agin you boldly go where no man has gone before, to kill, maim, and generally make a nuisance of yourself. Game Over isn't startlingly novel, but does have a certain addictiveness that keeps you playing, for a while at least.

The control method is sluggish, and the main character not only looks like a deep sea diver, but moves like one as well. Consequently, the game is difficult and frustrating - but the action remains strangely addictive. The title music is superb, but the in-game effects are very bland indeed.

There are plenty of this type of game around - so take your time choosing.

If you cast your minds back to the previous Imagine/Dinamic release, Army Moves, you'll remember that it was considered to be very good, but a touch too difficult. Well, here we go again...

Game Over is extremely nice to look at and great to listen to (There's a splendid Galway soundtrack) - but it's an absolute swine to play. There's plenty of action, but death is a frequent visitor, and once again you have to go *all* the way back to the start of each level when you're killed - something that I find annoying in any game.

Game Over is challenging, but far too frustrating to be considered an essential purchase.

While playing Game Over, I suddenly twigged that it's very similar to Hewson's Exolon. Both feature a character who has to battle over a series of flick-screens to a set goal. However, in this game the character is extremely sluggish to respond to the joystick and has an awkward jumping action - making jumping from platform to platform every tricky.

Even worse is a bug where the armoured fellow falls through the floor in certain situations. Even though these annoyances are almost unbearable, the action remains addictive, fired by the urge to progress.

The title music deserves a mention, but otherwise there's nothing outstanding to warrant the price. Take it or leave it.

Sound 92%
Great title tune (complete with sampled effects) - the in-game effects are rather poor though.

Hookability 63%
The control method is very confusing - but the game's addictive nonetheless.

Lastability 66%
Plenty of action if you're prepared to stick with it.

Overall 68%
A challenging, if rather frustrating shooting and exploring game.

A challenging, if rather frustrating, shooting and exploring game.