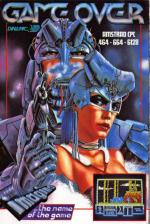 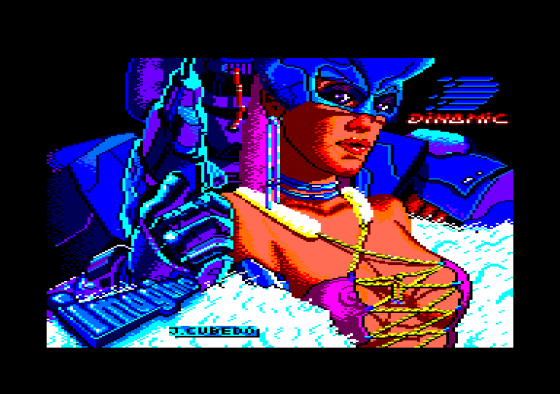 A principal female character at last, but one, I suspect, launched as a cassette wrapper to appeal to the male eye. But what's this? This woman, named Gremla, is a cruel and powerful galactic ruler, a mega-villain to out-shine Darth Vader.

The hero, yes you've guessed it, is a man called Arkos. He was Gremla's faithful Lieutenant but a sudden twinge of conscience has turned him into a super-goodie, determined to defeat the megalomanic obsession of his ex-boss. The final battle is played out on two levels and ladders worlds, the first called Planet Hypsis, the second Schkunn. You must dash across each, destroying Gremla's guardians on the way, and, on the final screen, defeat the Giant Guardian.

Hypsis is a horizontally scrolling world of 20 screens, peopled with five types of alien robots and another five types of objects. On the first screen you meet the small, floating laser shooters, robots that'll shoot straight for your head and drain your ever decreasing power unless you put four laser bolts into them. To offset their deadly effects, shoot at the Energy Heart cylinder, grab the heart which floats away from its remains and take on the energy it contains. 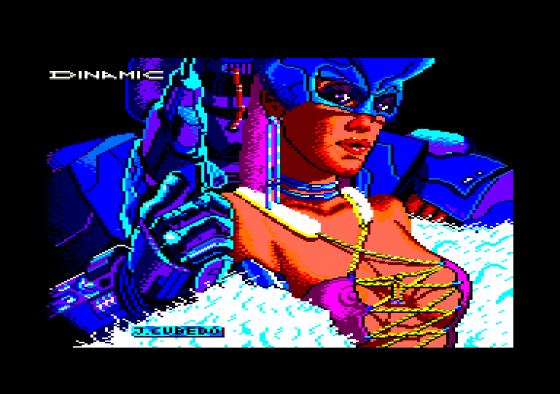 You'll need all that energy if you're to beat the second level which, when you first see it, you will think is unplayable. There are two level pads which move up and down in the middle of the screen. Jump to the first and then the second, but you must not hit the ground or you're turned into a mass of glittering vapour that floats away - and that's a life lost.

If you pass this screen you'll have seen and solved the play format for the rest of the game.

The levels change colour - blue to white - later in the game, and take on ladders in the middle of the map, but the method of moving from one end of the screen to the other is always the same. Only the guardian robots change. You soon encounter a massive guardian robot, a Dalek without an eyestick, which lobs huge energy bolts at you. Don't bother to stay around and destroy it. Just run across the screen in the vain hope that you'll retain all of your energy. 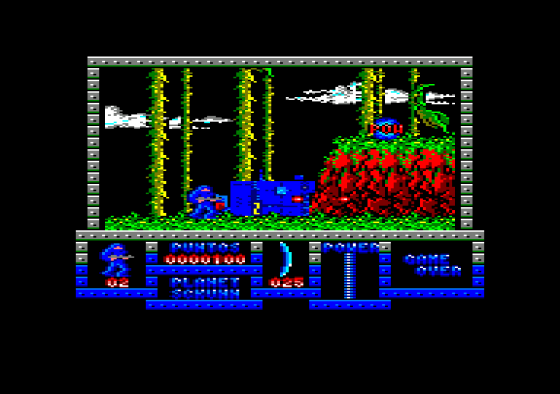 Next up are the green monsters which you find on the metal platform and stone bridge screens. They represent no threat that I could see, and don't even look pretty.

To combat all these forces you can pick up grenades on the ground and a nifty time you'll have to avoid the mines if you're ever to get to the second world.

The Planet Sckunn scrolls vertically and horizontally, so the gameplay's more difficult. That said, your weapon, puny though it is on the first level, it upgraded so that it produces a never-ending stream of laser power and will destroy everything in its path.

There are two stages to get through: The Forest and The Palaces. In The Forest there are lakes in which you'll drown as well a less-than-abundance of aliens. Admittedly you do get a creature called a Kaitas which takes two energy points from you when it hits you, but it can be downed with just one laser shot and doesn't represent much of a threat.

The Palace screen is an improvement over The Forest, but only marginally. It's crowded with elevators which take you from one floot to the other. Once you're in one you mustn't move or you could die. There are also mines scattered on the floor, and four more types of aliens with which you'll have to deal.

The aliens on this level shoot fireballs and you need to hit them four or five times before they're destroyed - not a difficult task with your super laser. The Giant Guardian at the end of the game, however, is another matter. Hit it 30 times and its wings disappear, 15 times and its body disappears, another 30 and its head vanishes. It's a devil to destroy and makes up for all the puny aliens in the other parts of the game.

The Giant Guardian at the end of the game is a devil to destroy and makes up for all the puny aliens in the other parts of the game. 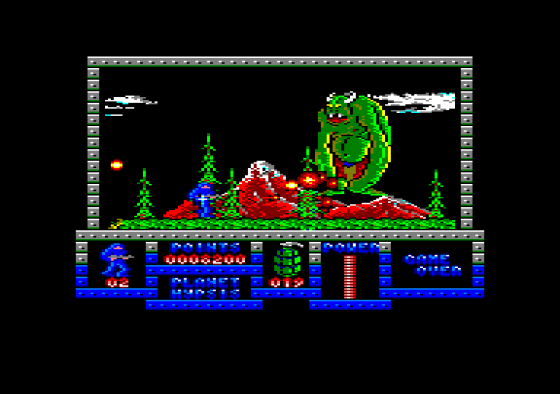 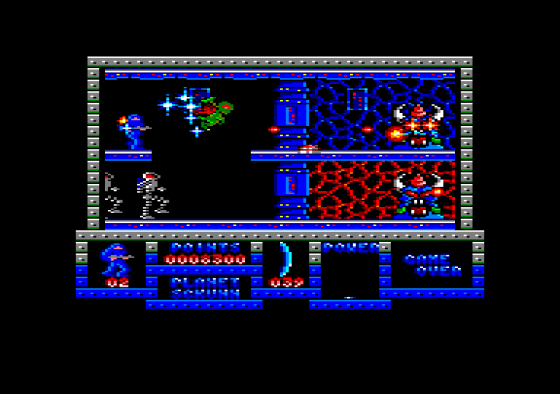 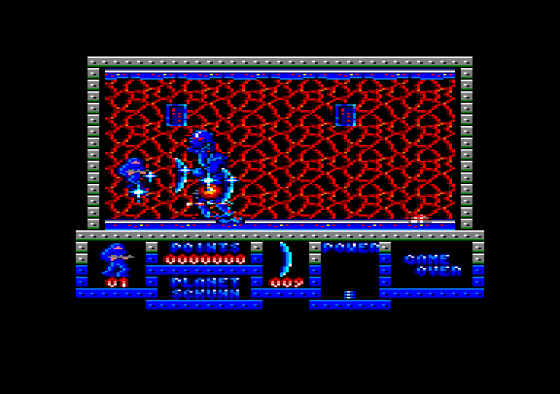