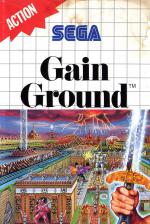 Many people consider simulation games rather dull. But when the simulation involves battling real androids in a controlled environment, things start to look a little more interesting.

However this game of the far future has gone terribly wrong; the androids have turned into killers, thanks to a malfunction in the main computer. A number of players are trapped in this lethal world, and their only hope of survival is to fight through the battlefields and reach and destroy the computer.

Based on the arcade game of the same title, Gain Ground pits one or two players, controlling their team of warriors, against the master computer and its minions. These take the form of weird aliens, robot soldiers, and huge metallic monsters.

Starling off with three characters, each player makes his choice and makes his way through each battlefield with the aim of reaching the exit.

Each of the characters has his or her own basic attack, together with a special weapon that usually involves a ranged attack. With fifty combat screens, often crowded with eYiemies, it's no simple task to gain ground.

Although only three characters are selectable at first, the troops at a player's disposal grow in number as levels are completed. Here's a selection:

Gain Ground was an obscure coin-op in the first place, and the Master System version hardly grabs the imagination either. A good idea has been lost in dreary, aimless play that constantly fails to grab the imagination; I thought the game would improve as it became more difficult - but no luck there! The graphics are block-like and lack any real animation, and in my humble opinion the sound has little to add to the overall blandness of this game. There are some good features in this effort, though; some of the later screens provide a fair amount of challenge, and it takes some time to work out the approach needed to battle through the robots. It's a shame that the play soon becomes repetitive. Still, it's a different game that just misses out in the excitement stakes.

I've never seen the Gain Ground coin-op, and if it's anything like this I'm not surprised it bombed. It's rather like a single-screen Gauntlet without the thrills and spills - just guide your soldiers through enemy lines and reach the exit. It's not a particularly challenging task, since all the enemy soldiers seem to be a bit stupid and don't offer much resistance, and there's simply not enough variety to keep you interested. The graphics and sound are both uninspiring, and it doesn't take more than a few sittings before you get bored. If you're after a fun shoot em up involving people against an army of baddies try out Gauntlet - it's miles better than this.

Presentation 74%
A rather dull intro sets the flavour of the rest of the game.

Graphics 69%
Although the sprites are quite detailed, the lack of animation and variety renders them dull and uninspiring.

Sound 67%
Simple and bland spot effects maintain the lack of thrills in this game.

Playability 72%
The play is interesting at first, but after as few sessions it all becomes rather monotonous.

Lastability 56%
Fifty screens might seem a lot, but when they're all basically very similar, lasting appeal is limited.

Overall 62%
A good game in principal marred by the complete lack of challenge and excitement.

A good game in principal marred by the complete lack of challenge and excitement.