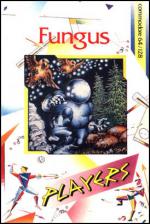 A long, long time ago, in a galaxy far, far away, there lived a little chap called Fungus - a happy lad who lived a quiet, lonely life on an island in space. His life was a simple one and he had no vices. Bar one... Fungus was hopelessly addicted to the galactic magic mushrooms which grew on the other islands surrounding his islet. This addiction proved to be quite a dangerous one, not because the mushrooms were harmful to his health in any way, but because of where they grew: on long, thin islands suspended in space. Nevertheless, it didn't deter him, and out he would go, every day, risking both life and limb just to pick a fresh supply.

You play the role of Fungus on his quest to collect mushrooms. The game is viewed in 3D panoramic style with the screen constantly scrolling from right to left. Before a game can begin the player has to go through a screen which allows various parameters of the game to be changed. Once the options have been selected, Fungus bounces down from the top of the screen and play begins.

Fungus can move anywhere on the screen by pushing the joystick in logical directions. The mushrooms grow all over the islands and can be picked up by running into them. However, once Fungus starts running along one of the lateral heavenly bodies, he can't stop, and this is where the problems start. There are holes in each island and if Fungus falls into one of them, he loses one of his four lives. Luckily, he's an athletic little chap who can be made to leap over dangerous gaps by pressing the fire button.

There is another problem, though. The strange animals inhabiting these islands aren't too keen on Fungus swiping all their lovely mushrooms and they try their best to stop him, either by by crashing into him, dropping on him, or shooting him. The animals aren't the only things inhabiting the islands - trees, shrubs, and other very strange looking alien plants grow in clumps, providing even more trouble for the mushroom-munching matey.

I enjoyed playing this game, what with the cute graphics and neat gameplay. The only major problem is learning to control Fungus - it takes a fair bit of practice before you can get to grips with what he's doing. It you like persevering with tough games then this one certainly has plenty of rewards. The graphics and sound are both really good, and the whole program is slick and very well presented. Definitely worth a look at.

Fungus is a very pleasant game in every way. The graphics, sound and gameplay are all quite simple and straightforward, but very jolly and great fun. Fungus is rather frustrating to play at first, but it soon proves addictive and compulsive, and continually found myself coming back for more. Fungus is a nice game. It's two quid well spent.

Players have certainly come up with the goods here. Fungus has got everything: lovely graphics, pretty tunes, and a game which is extremely addictive and fun to play. I found that my first few games of Fungus were quite hard to play as the 3D effect takes some getting used to, but once you master them, then the whole games comes to life. Fungus is very pretty to look at, with Fungus being the cutest of all when he bounces on to the screen at the beginning of each game. My only gripe is that when you get a lot of mushrooms all in one go the score can take quite a long time to build up. Still, for only two quid Fungus represents a jolly good buy.

Presentation 92%
Plenty of useful options which let you choose the game level, difficulty level, and colour of the landscape. The Lodagame is also very neat.

Hookability 76%
The game is quite simple, but it's initially very tricky to get Fungus to do what you want him to do.

Value For Money 91%
A worthy investment.