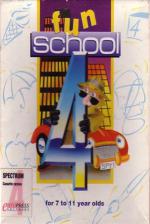 It's back to school time again and although most of you may not like the idea lets face it, things could be worse... You could be facing a firing squad or being horribly tortured with some matches and a pair of pliers, or, even more terrifying, forced to watch a Bob Monkhouse TV show with special guest stars Bruce Forsyth and Jeremy Beadle. See, going back to school isn't THAT bad.

Although Mr. Brown in 4C with the long nose, dandruff and bottle bottom spectacles might be a boring old fart there are in fact far more enjoyable ways of learning. One of which is right here on your Speccy - educational software. It's puzzling, informative and fun, and best of all, it gives you an excuse to play on your Speccy during time normally allotted for homework without incurring the wrath of your elders. (It also gives you a chance to slip in the odd arcade game for mental stimulation, though don't tell your mum I said this.) There are a wide variety of educational games available so here, to help you choose, is a selection of those currently readily available and a quick guide to their usefulness.

Again, this version of the Fun School series introduces a new and even harder character, Sammy the Spy, also known as Agent Q. Sammy has to go on a number of missions around the world which test (to the limit in some cases) the user's knowledge of geography, history and mathematics. Again this is quite a difficult game for those who haven't done these subjects for a while but since these games correspond to the new National Curriculum the 7 to 14s should be able to cope. Again everything is very well planned and humourous and the standard of graphics in this Fun School series really is top form. Well done Europress Software.

Everything is very well planned and humorous... The standard of graphics in this Fun School series really is top form.