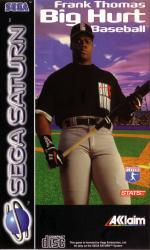 Ironic, isn't it, that baseball bats are crap for hitting anything as small as a ball (which you will concur with if you've ever tried) but are just the ticket for hitting people. Acclaim, however, have decided to play ultra safe and provide us with a ball game, not a beat-'em-up. And to endorse this motion-captured masterpiece they've found Frank Thomas, who is, we assume, famous in the States. Not to be confused with John Thomas, which is a slang term for your willy. And would take less kindly to baseballs being pitched at it.

Hit balls and score runs on the diamond, catch your opponent out.

Batting is a simple affair, with the motion-captured movement of the main sprite in evidence, though curiously limited in the batting animation stakes. The secret of getting a home run is in timing, with the added finesse of directing the ball achieved by moving the D-pad as you strike it.

Big Hurt far outdoes World Series Baseball in the choice of stadium backdrops. Every team's home arena has been digitised into the game, so your surroundings change with each league encounter.

There is a commentary to accompany the game, and a minor innovative touch is creating the echo of a stadium announcer, rather than a TV commentator. Pitchers and batters are introduced as they step up, and requisite levels of excitement are employed when good shots occur. Thankfully there's none of that horrible organ music.

Big Hurt Baseball is a classic American-style sports simulation in featuring the obsessive one-upmanship when it comes to statistics. Even back in the Genesis days, games covered the game performance and abilities of dozens of professionals. With Big Hurt, this is taken about as far as is possible, with full play stats available at any point.

Amongst these you'll see some of the big names like Cal Ripken, and they can be useful in moulding your team.

You can choose between the two major baseball conferences: American and National, and the fourteen teams within each. Various season lengths are optional, and you can reduce the number of innings should nine prove too arduous.

Finally, a choice of baseball games on the Saturn, if that's what you really want. I expect not, but World Series from Sega did okay, and was generally deemed to be a fair version of the sport. Acclaim's bid is neither much better or worse.

It scores highly in a dedicated coverage of the game as it is at the moment in America, complete with a wealth of statistics. The commentary is also handled in a more atmospheric fashion, although the crowd are pretty mute. It's an easier game than World Series, as the computer fielders are ess proficient, so the frustrating turnover of innings without score is less likely to happen in Big Hurt.

You can also make it considerably harder for yourself by turning off the ball marker. The main letdown is the rather poor batter figure, considering the much vaunted motion capture employed.

All in all, a reasonable version of a niche (here at least) sport.

Sorry, but I really can't get enthusiastic about baseball at all. The real thing or the computer game versions, all of them are boring and in my opinion represent a glorified version of our own dull sport, cricket.

The problem with this is that there is nothing to immediately grab you into playing for longer. The controls are strange and awkward, and don't really allow you the freedom of movement (with pitching especially) that other sports titles give you. And the chances of getting people round all of the bases before you get three outs are slim as well. Not my cup of tea.

Music 67%
N. Very little and none of it memorable.

Effects 83%
P. Like the echo of the announcer's voice, though he's not exactly loquacious.

Playability 82%
P. Easy to get to grips with both pitching and batting.
N. The computer is a bit stupid.

Lastability 80%
P. Lots of league data, and not too frustrating.
N. No real finesse or skills to expand upon.

A well composed, and generally accomplished, baseball simulation with no stunning features or gameplay.