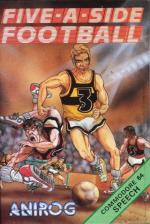 Commodore's International Soccer has long ruled the Kop as the best football simulation around but this game from Anirog is a worthy challenger for the championship.

The opening menu offers a one or two player game of soccer or penalty competition at any of three skill levels. The penalty game I found to be quite disappointing despite the excellent graphics but the football match itself is great fun.

My complaint about the penalties relates to the way in which the ball sprite is handled. The view of the penalty is from behind the ball looking towards the goal and, when the ball is kicked, you must move the goalkeeper in the direction the ball is travelling and press the fire button to punch the ball out. Unfortunately, the sprite for the ball does not switch from foreground to background priority and it is only when the message appears on the screen that you know if the ball was saved or not. I found these penalties to rely more on luck than judgement and I can't honestly say that I enjoyed this aspect of the game.

Really it's the football game itself by which the game will be judged and, on the whole, it passes the test. The first surprise is the use of Anirog's excellent Voice Master unit to produce a suitably boorish football chant just before the kick off. From the kick-off, the player nearest the ball is controlled by joystick and this is signified by him being highlighted in a darker colour than the rest of the team. He can dribble by sending him on a collision course for the player in possession of the ball. Alternatively, he can kick the ball with the strength of the kick being determined by the length of time the fire button is held down before being released to effect the kick.

Five-a-side is noted for being a very physical sport and the contact aspect has not been ignored in this simulation. Hard tackles will floor the opponent but too much rough play will result in a penalty kick-off from the centre spot being awarded to the victim's team.

The second surprise comes if you indulge in excessively rough play; a punch up is staged on the pitch. After a few seconds of thumping good entertainment, penalties are awarded. Each player in turn has a chance to shoot for goal from the penalty spot. The fight is fun but the penalties... well, you know what I think!

While I'm in a critical mood I'll also have a moan about the goalkeeping during the match. Maybe it's me but I found it very difficult to judge the level of the ball when placing my keeper for the save. Perhaps a little more practice will reveal a few hidden secrets in the art of goalkeeping.

The view of the pitch is treated in the same "Match Of The Day" television camera style which Commodore adopted for their game and the side-to-side scrolling is just as smooth. Further comparison between the games would not really be fair because the action looks the same in both games. Really it's a case of you pays your money and takes your choice, bearing in mind that this game costs just under £6.