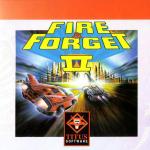 Ever wanted to drive a car that thinks ifs a plane (or maybe a plane that thinks it's a car)? Well, it's not very likely is it? The nearest you're likely to get is playing Fire And Forget II, and frankly that's about as near as the England Football team are to appearing in a World Cup Final!

Thunder Master 2 is your craft for this mission, equipped with phasers and a missile launcher. Your task is to protect the Peace Conference from terrorists who are heading towards the city to kill the delegates. You are the government's solution. Time is limited so climb into Thunder and get to work.

Destroy everything that comes near you except for the fuel and ammunition power-ups. When you reach take-off speed, launch your car and take to the air. When you have killed the convoy of armoured vehicles you get to fight the big baddies. The final confrontation is with the vehicle carrying the tactical 'life thirsty' nuclear mega missile (also known as Trident). Kill this, and the conference is safe.

Somehow the kill, kill, kill ethos seems to work for this game. In fact, this ethos is so all-pervading you don't even have to bother steering to stay on the road; the game does that for you. You just concentrate on aiming the Thunder Master 2 at the enemy and blasting away like their lives (being terminated) depended on it.

If you like driving games Fire And Forget II is not for you because there really isn't that much driving in it. But let's not hold that against it. Me? I can drive a car in real life, but because driving sims are, let's face it, so far removed from the real thing, I don't really enjoy them that much. Fire And Forget II extracts the driving element from the equation and what's left is really rather good.

If you like shoot-'em-ups and want something a bit different to horizontally-scrolling alien blasting then this should be right up your street (at about 150mph).

If you like shoot-'em-ups and want something a bit different to horizontally-scrolling alien blasting then this should be right up your street (at about 150mph).