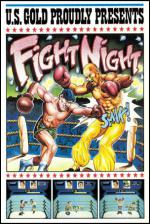 Fight Night is the fourth boxing game/simulation to be released on the C64 and has been around a year in the making. It boasts many features and an exciting combination of cartoon quality graphics and highly amusing gameplay. There are four main options present on the cassette version and five on the disk.

The five options are: main event, boxer construction, tournament (not on the cassette version), sparring and training. Main Event puts you in an arcade style situation where you have to battle your way through four opponents to be able to challenge the champ. Boxer Construction allows you to build and personalize your very own boxers for use either as opponents or to fight with. Sparring and Training allow you to test out your boxer's strengths and weaknesses and put them to rights.

Tournament (disk only) puts you in a managerial position as you set up a grand competition of all constructed boxers in a 'round robin' tournament.

As you may remember, we virtually reviewed Fight Night in issue 8, except for the ratings, as US Gold told us the copy we had was not exactly complete - but almost; so for more information consult the Fight Night preview in issue eight.

At last! Fight Night has finally been completed and released. The graphics are the most stunning aspect of the game; they're absolutely superb with brilliantly animated, giant-size characters. The computer pugilists are just like cartoons, and the results of their 'super blows' are hilarious (especially Dip Stick's below-the-belt special).

The boxer construction mode is great fun and you can use it to construct some hysterical boxers to fight with or beat up! The main event provides a highly enjoyable and very challenging game. Some of the later characters are really tough and getting to fight The Champ will certainly take some doing. Not having the tournament mode on the cassette version doesn't really seem to detract from the game in any way and both the disk and cassette versions are excellent products and shouldn't be missed.

Definitely the best in its field, Fight Night is just so realistic. Sprite work like this has just not been seen before on the 64. The only detractions were the ineffective sound effects, splodgy white noise when there should have been something sampled. Apart from being a great arcade hit, Fight Night's boxer definer is of excellent quality allowing the creation of the most wimpish opponents to the mightiest of flesh pounders. As simulations go Fight Night is the best, forget the rest.

Fight Night is as good as Barry McGuigan's but employs a different approach. The graphics are certainly better, with impressively large and well-animated characters. Whereas the Activision title is enjoyable to play because it adopts a very serious approach to the noble art of fisticuffs, Fight Night is just as much fun because of its light-hearted angle -- although it still follows an acceptably logical attitude to boxing. The numerous options are all extremely easy to use and being able to define your own boxers adds to the game's lasting appeal tremendously. US Gold have managed to put together a sports simulation that is not only good to play, but fun to watch as well, combining natural laws with those of the animated cartoon strip. This should appeal to just about everybody.

Presentation 96%
Excellent options which are a doddle to use.

Sound 63%
Jingles, whaps, whops, and chrrrrrrrrrr from the crowd.

Hookability 99%
Easy to get into and difficult to put down.

Lastability 97%
If you get bored of the computer opponents then you can always build your own!

Value For Money 91%
Good action, lots to do and novelty value on top.