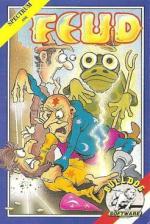 Released on yet another of Mastertronic's labels (Bulldog) Feud is a promising-looking game that doesn't quite come up with the goods.

The plot has possibilities - you play a wizard named Learic who is involved in a feud with his brother Leanoric, who also happens to be a wizard. Being wizards their feuding involves much turning of each other into frogs, blasting with fireballs and the like. But before the spell throwing, you both have to collect the necessary herbs and ingredients to prepare the spells.

Graphically the game is very slick. Learic is quite a large figure, very well animated as he wanders around in his monk's habit, and on the whole the graphics compare well with quite a few full-price titles. The trouble is that the business of finding all those herbs and things goes on a bit too long, so that instead of getting down to the serious business of transmogrifying each other, you spend most of the time wandering around bits of forest and along dead-end pathways looking for flashiing flowers. Finding the herbs ought to be just the build-up to the big fight, but as it is, it takes so long that the action gets slowed down and drawn out, making the game a lot less addictive than it could be.

Still, it is very nicely presented, and while it's not a budget classic it is a fairly respectable effort.

Very nicely presented... While it's not a budget classic it is a fairly respectable effort.