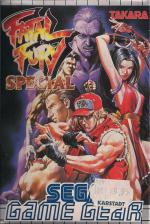 Imagine being a multi-millionaire who doesn't have to worry about anything cash-related. If you wanted a yacht, you could just go out and get one. If you saw the latest in TVs, you could get one delivered instantly. But imagine that, after getting used to such a lifestyle, it was taken away. All of a sudden, after years of blowing thousands on food, you couldn't afford a cheese sarnie. Well, that's what this Fatal Fury conversion is like.

Andy Bogarde and his cronies started life as 100Meg superstars using massive sprites, intricate backdrops and stunning-looking moves. In Fatal Fury and its sequels there was nothing they couldn't do. They fought on moving trains, used the largest sprites ever seen in a beat-'em-up, and astounded both Neo Geo owners with stunning special moves. Now, however, they've landed with a bump in this 4Meg handheld bout. With their numbers and size reduced, Andy and Co. have gone from being the largest handheld heroes, on par with Mortal Kombat II, to... well, words fail me.

Fatal Fury Special draws ideas from past conversions of the series. Nine fighters are on offer as the player battles their way across the world, each of whom has a variety of kicks and punches which are effected using the two buttons. Similarly, each of the fighters has a selection of special moves akin to those in Street Fighter and MKII, allowing them to pull off fireballs, etc.

There are more failures amongst Game Gear combat games than successes, and you can go and stand with... the failures! Yes, wobbly sprites and blockyville-on-the-chunk style backdrops. Gameplay is so hit-and-miss that I'd advise playing with your toes! Take your boots off first or you might do your Game Gear a damage. I certainly felt tempted after half an hour of this.

The Megadrive version of Fatal Fury rates as one of the worst beat-'em-ups I've played. In the conversion from the massive Neo Geo game ended up resembling a very second-rate Street Fighter clone. Sadly, the downward conversion spiral seems to continue as Game Gear Fatal Fury Special is even worse.

MKII for the handheld proves such conversions can be skillfully done, but Fatal is a very scrappy conversion. The sprites are weak and zip around with very little realism, and the moves are limited. Granted, there are special moves to be had, but as the game requires very little skill to progress they become rather redundant. I'd stick to MKII if I were you.

Lastability 42%
Nice characters, but it won't take you long to reach Geese Howard.

Overall 46%
Such a coin-op was never meant to grace the humble Game Gear. Basic and shoddy.

Basic and shoddy... Gameplay so hit-and-miss I'd advise playing with your feet! I felt tempted to do my Game Gear some damage with them after half an hour of this.