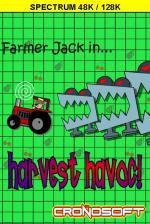 Ignore what you may have read elsewhere (*cough* -RG- *ahem*), Farmer Jack beats the crap out of Mr Do! RGCD celebrate their favourite Cronosoft game to date with an interview with the biggest-name in retro publishing, Simon Cronosoft himself!

Reading the instructions for Harvest Havoc shows that and me Jack have something in common, because Jack loves his home-brew wine. But whereas I just like the odd glass every now and then (just to be social like), Jack has turned his hobby into big business. Unfortunately the more successful he got, the more jealous his competitors became and before long they were ganging up to send mechanical menaces to wreck his orchards. "By eck! Me 'arvest!" exclaims Jack as he jumps in his shiny red tractor. And that's where you come in. The aim of the game is to drive said tractor around the orchard collecting all the fruit whilst avoiding the metal beasties. To fight back you can drop rocks on the evil machines by removing the soil from beneath them (is this starting to sound familiar yet?) and you also have a limited number of bombs at your disposal.

Now if you ever went into an arcade in the 80's then you will surely recognise the premise (and even more so the graphics) as none other than the wonderful Mr. Do! So how well has the game been converted to our rubbery friend?

Bob Smith has done a great job with the visuals and whilst the game is almost a direct copy of Mr. Do! He has managed to add some new character to the graphics, particularly in the brilliant little tractor that jaunts along and actually looks sad when you crash him into a bad guy or he gets crushed by a rock. The gameplay is not quite a smooth as the original, but is more than adequate and when you add in the wonderful AY music and sound effects by Lee Du-Caine you have a great game that is easily worth the £1.75 download fee (or £2.99 for the cassette version). Don't believe me? Well grab the free 3 level demo and try it out for yourself.

It's only fair that when a game is led by the kind of Somerset philosopher of Farmer Jacks stature that we let him have the last word. Go on jack give them the benefit of your wisdom...

It's no secret that I have a lot of love for Harvest Havoc - which is admittedly a bit odd as I'm not at all keen on the original Mr Do!. Maybe it's because I prefer Jack's Bomberman-style explosives to Mr Do!'s naff bouncy power-ball? Perhaps it's because I find Angry Farmer & Tractor vs. Robots a more agreeable scenario than Clown vs. Dinosaurs? Or it could be because (like Jack) I'm a West Country lad with a special place in my heart for Sir Clive's 8-bit opus. Oh, and that's the real Sir Clive Sinclair I'm referring to there - unfortunately, 'SirClive' (the RGCD reviewer) did not invent the Spectrum, although I'm sure he wishes that he had.

Quite simply, this is the best single-screen arcade game I've ever played on the 128K Spectrum - if I'd reviewed Farmer Jack it would have probably ended up with an overall score in the 90's. Everything about it is pure class, from the ace backing music to the crystal-clear graphics and pixel-perfect collision detection. The game-play and difficulty curve are spot-on too, and every time I play it I succeed in progressing a little bit further. Anyway, you don't have to take my word for it - install the demo and give it a blast. If you're a fan of old-school arcade games (like me) then I expect you'll soon be shelling out the highly-reasonable £1.75 download fee for the full version...

The game-play and difficulty curve are spot-on too, and every time I play it I succeed in progressing a little bit further.