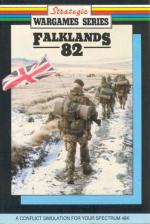 Some months after its release on the Commodore 64, PSS's simulation of the battle for the Falklands has become available to Spectrum owners. The game comes in a small but neat cassette box complete with instructions for play, army lists and (brief) designer's notes. The game is intended as an introduction to war-gaming and potential buyers should be aware that its detail and scope are in no way as thorough as say, Desert Rats. The program is a very simple simulation of the ground based conflict across the North Eastern part of the Falkland Isles with only limited appreciation of air power.

The game loads fairly quickly and immediately presents the levels, with a choice of difficulty levels. These range from 1 (Easy) to 5 (Masochistic! and reflect increasing morale and competence on the part of the Argentinian forces. At this point, I should note that the game is a single player only simulation and there is no option to play the Argentinian forces.

Once the difficulty level has been selected, the player must allocate priority missions to ships in the task force fleet sitting off the island's shores. This simply consists of telling each ship in turn whether it should concentrate its firepower on ground fire support for the land forces or whether it should concentrate on defending the task force itself. Here is the first fault of the game. All the ships are said to have the same firepower available for the sake of simplicity and playability. I do not see why a more accurate evaluation of each ship's attack and defence potential (perhaps considered on a points basis) should have complicated matters for the player. Depending on how you select the balance of priorities, the task force's vulnerability to enemy air raids is altered. Because the gameplay concentrates on the land based forces, you just have to grin and bear it while the Argentinian forces attack your fleet.

Next, you have a choice of four possible landing sites for your forces. Two of your units (SBS and SAS Recce units) have the ability to carry out intelligence gathering missions at this point to select the best possible site. Sites available are Port Stanley, Uranie Bay, Cow Bay and San Carlos Bay, the historical site of the landings. Once a site has been selected, all future landings must take place their.

The entire play area is displayed at once, so following the progress of the battle is very straightforward indeed. The whole of the map is very clear with one exception: mountains. These are drawn in yellow on a green background making them extremely difficult to distinguish from the background. Incidentally, some of the text causes this problem as well, appearing as white or yellow on a green background and is quite hard to make out as a result. As some combat results are only shown briefly, this can be annoying.

Units are displayed as single characters with only colour to differentiate between British and Argentinian units. This is not a problem however, as when a unit is being dealt with, its full identification and combat status are displayed at the bottom of the screen. Units have a number of factors which affect their ability to fight and move. AF is the aggression factor, the value set against another unit's DF (defence factor) to determine the outcome of combat. AF may be decreased but never increased. DF, on the other hand, may be increased if such details as terrain features prove favourable to the defending unit. MV is the movement factor, indicating the speed at which a unit may move. This may also be reduced by terrain. Lastly, RG is the range factor. Only artillery and armoured units may engage in ranged fire.

Ordering units is simplicity itself and is merely a question of following the prompts, Attack, Move, Pass, Recce (S8S and SAS only). Results of combat are displayed immediately. Depending on the weather, Air Support and Ship's Guns may be brought to bear on an enemy unit. However, for some reason, these options are available only after your ground unit has attacked the enemy. Again, I can see no reason why the game would become substantially more complex if the logical option of pre-emptive air strikes was given. It would avoid an unnecessary build up of casualties. To be fair, if a unit is ordered to attack an enemy group which is out of range, a message will point out this fact but still allow ranged missions from the task force to be carried out. This, I feel, is a clumsy and unnecessary way of getting around the problem.

Depending on the difficulty level set, the player must retake all ten settlements and hold them for one full turn afterwards. The enemy's air strikes will be random and may be intercepted by Sea Harriers on patrol. During the game, you have no control over this aspect of the game. The game makes use of zone of control and limited intelligence during play and sound effects are used to emphasise certain events.

Falklands '82 is definitely the beginner's game. It doesn't include helicopters (as the author decided their use would hopelessly unbalance the game) or logistics. Nor does it allow the player to experiment with choices the real task force commanders never had, like directing high level bomber strikes against the Argentinian mainland to reduce enemy air effectiveness. The result is a highly simplified game which is easy to complete successfully. It fails to offer a serious challenge and, whilst being good as far as it goes, ultimately fails to achieve its aims.

A highly simplified game which is easy to complete successfully. It fails to offer a serious challenge and, whilst being good as far as it goes, ultimately fails to achieve its aims.