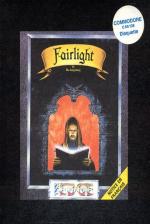 Once upon a time in these lands... Isvar turned away from the storyteller and knocked back the remainder of his pint. He'd heard the story so many times, about how the Land of Fairlight had changed from a happy place to one of desolation and misery. All that was 3,000 years ago when King Avars held his court in the Castle of Avars on the Plains of Avarslund. The storytellers claimed that then was a time of light and magic, but who really cares? Today is a time of Feudalism, with the frightened peoples of these fragmented lands ruled by a group of ruthless Barons and Merchants.

Bored, Isvar left the Tavern and strolled across the fields. Although it was July, the sky was grey and the clouds had that strange tint that always heralded snow. In the distance was a dark band which caught his eye, the edge of Ogri's Wood. The sight of this caused Isvar to ponder, 'The Elders claim that there are poisonous snakes in that wood and that it is an evil place' he said to himself. But he knew that there were no snakes at this latitude and anyway, the cold would have killed them off if there were any - so why had he been told never to enter? With his thoughts racing he leapt across a muddy brook across the fields towards the forbidden forest.

After pushing his way through the bramble barbs he found a clear forest track and confidently strode along it. The woods bordering the path were thick and dark and it was becoming increasingly difficult to see anything when Isvar suddenly heard the sound of undergrowth being trampled. A wave of cold fear swept over him and he hastened along the path, looking over his shoulder. There was nothing to be seen so he took a deep breath and turned - and there stood a huge woman-like creature. As he gazed at her he found himself becoming transfixed, his body numb and his eyelids heavy.

Isvar awoke what seemed like an eternity later and shivered. The typically cold and damp Fairlight day had given him aching limbs and he shivered. A slight noise caused him to look round and there, in the entrance to the cave, stood a hooded figure. Before he could react in any way it spoke 'arise Isvar, we have much to do, and if you do not move I fear that Ogri will return and feast upon you as her breakfast'. Isvar jumped to his feet and followed the man into the glade outside.

'You have strayed, but I can lead you to safety' said the mysterious man and he turned and strode down the nearby slope. Isvar hurried after him and they both pushed through the undergrowth.

After what seemed like an age, the overgrown path reached a smooth wall and the old man turned to follow it. Suddenly he turned and swiftly disappeared into an opening in the wall, beckoning Isvar to follow him.

The opening led to a courtyard and Isvar looked about him and suddenly knew where he was - the Castle Avars! He turned and looked at the wall but it was seamless. He was trapped. Instantly, waves of panic coursed through him, but the hooded man spoke and his voice was reassuring: 'I have lured you to this castle. You see, I live here, or rather I am a prisoner here, being held by the slayer of King Avers. I was his sorcerer. What you see is just a projected image of myself. I must be freed and the only way that can be is for you to find the Book of Light, hidden somewhere within these walls. You will see trolls, guards and many other creations which are here to destroy anybody who manages to gain entrance to this castle. Do not fail.' And with that the image of the sorcerer disappeared...

You play the role of the reluctant hero and you can move anywhere on screen as long as ground, stairs or other objects allow and strolling off screen causes the game to flick and show another location. The game does its best to behave just like real life and Isvar can clamber up and down steps, jump on and off objects, and so on. He can also pick up, use and drop objects. Isvar has five pockets in his garments, each of which can hold one object. Some objects have magical uses and others are for practical purposes. You'll just have to find out which object does what and why by experimenting. Bigger objects, like tables, barrels or chairs, can't be carried if Isvar has other things, but they can always be pushed along.

There are quite a few weirdoes residing in the castle and all of them deplete Isvar's life force if he touches them. This life force is displayed on screen as a counter which starts at 99 and diminishes as he gets beaten up. He can fight with his trusty sword, although not all of the nasties can be prodded to death. Luckily the hero can top up his life force by eating (using) the food and wine which can be found around the castle.

There are plenty of locations and they're all colour coded so you know where you're at. For example, all the open air locations are blue, but there are also caves, tiled rooms, towers with flights of stairs - you'll just have to discover for yourselves.

Fairlight is an excellent game though it does have problems. The main, and most obvious, being its severe lack of speed. However, the amount of thought behind the actual game helps the player ignore the lethargy of person/game interface and you'll soon be fairly involved. 3D-wise, Fairlight works quite well though the amount of time needed to set up the screens can be a bit lengthy and you can find yourself watching a black screen for quite a bit of time.

Control over the hero is nice and easy to handle including the manipulation of objects. It's all very clever and anyone with a sort of adventure bent would be well worthwhile having a go at sorting out Fairlight.

This is certainly a tricky game to get into - the instructions give no clues and it's a case of trial and error from the start. The graphics are very effective and give a convincing representation of a real world within the C64. The major niggle is the speed that the game is played - it's all ever so slow, especially when there are other things beetling about the screen, and the delay when moving from one location to another is quite long. If you don't mind the speed, then this game could well appeal, but if you like fast stuff then it might cause frustration. The best thing is for you to have a look at it first and decide for yourself.

I found the slowness of play off-putting at first, and had serious doubts about the playability of Fairlight. But, perseverance proved rewarding and, despite the speed problems, I enjoyed playing it. In fact I still do, even though to be honest I can't get very far.

Fairlight has an enthralling atmosphere and is highly absorbing to play. It is a very deep game which will take ages to solve, and I reckon that The Edge have got a bit hit on their hands. Lousy music though.

Presentation 80%
The keys are easy to use and the screen layout is quite nice.

Graphics 89%
The 3D is effective, although everything is rather slow, especially when moving from screen to screen.

Sound 69%
Sounds rather like a remix of the Wizardry music, but not as good.

Hookability 88%
It's initially difficult (and slow!) to get into, but once you start solving problems it becomes compulsive.

Lastability 92%
Plenty of problems to solve and locations galore to explore.

Value For Money 87%
A lot of game for your money.

Overall 90%
A jolly good arcade adventure which gets the grey matter clanking into action.

A jolly good arcade adventure which gets the grey matter clanking into action.