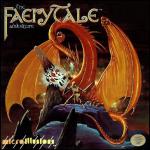 Just released is a C64 version of a role-playing game downgraded from the 16-bit original on Amiga and PC. I say 'downgraded' as opposed to 'converted' because although I have not seen the game in its earlier incarnations, I find it hard to believe that any 16-bit game could be as clumsy to play as this version.

The objective is to rescue a Talisman, which requires the player to defeat the Necromancer (yawn). The player, in fact, is Julian, but should he die during his quest, one of his two brothers takes over. Lose them, and you have to start again.

Moving Julian and his family over semi-plan views of the fields and buildings is a pretty tame affair if you have just polished off Leisure Suit Larry, for the animation is minimal, and the pictures boring. Buildings can be entered and searched, but the disk loading response time for this is poor, and not visually rewarding when you get there anyway. And it is all very well entering building after building, but it is all a bit mundane and boring without some sort of clue or purpose to provide interest and incentive.

But by far the worst feature of the game is the command and control system. Combat, as well as movement, is by joystick, but the control is too crude to do more than just juggle frantically, and hope you smash your enemy to a pulp. If, that is, you can recognise the enemy in time, for as characters approach there is no way of knowing if they are friend or foe until it is almost too late.

Alas, there is worse to come. Commands from a small on-screen menu can be entered by hitting the 'appropriate' key, but the scant instructions fail to explain this fully. Often the key hit will produce an entirely unexpected result. A number of commands seem completely unobtainable, and it is difficult to tell whether this is due to bugs in the program, omissions in the instructions, or, as I suspect, a mixture of both.

A combination of boring plot, uninteresting graphics, a frustrating command system, and instructions written by an incompetent, led me to turn off the C64 before I suffered irreparable brain damage. Yesterday's technology, yesterday's game. What a waste of two disks. Yawn...

Yesterday's technology, yesterday's game. A combination of boring plot, uninteresting graphics, a frustrating command system, and instructions written by an incompetent, led me to turn off the C64 before I suffered irreparable brain damage.