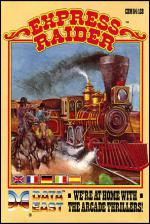 Yup, it's time for some rootin' tootin' cowboy capers arcade style. Express Raider is a mix of martial aristry and shooting skills set in the Wild West.

If you've played the game in the arcades you'll know how sometimes it can be ultra-frustrating - but fun at the same time. The computer version is the same. Parts of the action will make you want to throw your joystick at the screen. Parts of it will have you on the edge of your seat.

The message is that it's worth getting by the irritatingly difficult bits just to play the rest of the game.

The idea behind the game is pretty basic. You have to fight your way onto a train, fight your way along the top of it leaping from carriage to carriage, then it's on to horseback for a rip-roaring ride up the side of another train shooting up the gunmen defending the gold.

All this has to be done within a given time limit - fail and you lose a life. The good news is that you can always restart the game where you left off. None of this back to the beginning nonsense.

You can play the game in any one of three modes. Practice mode gives you an amazing 32 lives - but you only get to play the first two trains. There are eight in all.

In the normal mode you get five lives and get to try all eight trains. If you lose all your lives you get the option of going back to the beginning or hitting the fire button within ten seconds which places you back at the end of the train where you died with your boots on. A useful feature, this. In advanced mode you have to go back to the beginning when you've lost all your five lives.

The action begins at the railhead where your cowboy has to battle a few goodies as the train - nice graphics here - pulls out.

If you fail to beat these railway guards - bit like the rush hour this part - you miss the train.

Beat them and you climb aboard and begin your battle to reach the engine before time runs out. The first couple of defenders are easy to get rid of with a few well-aimed kicks and punches. The next guy throws bottles at you which are easy to dodge. Get in close and nail him with more kicks and punches.

The one thing that really lets the game down are the sound effects. Silly little tunes and poor spot effects litter the game. C&VG's Golden Joystick winner Rob Hubbard should have been allowed to get to grips with this game.

Arcade addicts may find this conversion doesn't come up to scratch.

Overally, not a bad game - but the sound and frustrating bits of gameplay let it down.

Not a bad game - but the sound and frustrating bits of gameplay let it down.