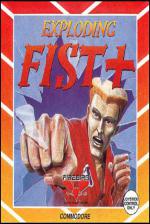 After a hard day at the inflatable toy factory it's time to relax... You pull on your Kung Fu pyjamas and get down to the centre of town to beat the living daylights out of two similarly-minded martial artists.

So there you are, in the middle of the street in your jammies, faced with these two mean-looking Orientals - what are you going to do? What you're going to do is show off those sixteen fancy Kung Fu moves you've been practising on your granny, beat these guys to muesli and get yourself moving up the Dan league table to the commanding position of tenth Dan.

Your repertoire of martial manoeuvres includes five different punches, three kicks, two leg sweeps and numerous evasive movements (even forward and backward cartwheels - oooh!). When a fighter scores a hit on one of his opponents, he illuminates one of six score lights; two if he scored with a torso or head blow. At the end of each timed round, the player with the least number of lights lit loses and is qualified from the next round.

Every two rounds there's a bonus stage, in which you have to move an on-screen hand into the optimum position for throwing daggers into ninjas who are rushing across the rooftops to get you. If one lands on the plaza where you're standing it's back to the streets for more beat-'em-up larks with your two pugillist pals.

Hang on, haven't we seen this somewhere before? This is very much like System 3's International Karate+, except it's not as polished graphically or sonically.

The quality of the sprites and backgrounds hovers just above average, but the use of sound seems to comprise sampled parrot squawks from the fighters and an awful background dirge.

The fighting action is surprisingly easy to control considering the number of moves - there's even a couple of new ones, like the cartwheels and the back elbow, which should impress anyone's tortoise.

On the whole, Fist+ is good fun to play for a while, and the knife-throwing sequence puts a bit of spice into the game, but it needed to be better presented to make it a serious competitor for IK+ - especially at this price.

Beat 'em, biff 'em, do a cartwheel into their mush - yeah! Erm... I've liked this sort of game ever since I clapped eyes on Yie-Ar Kung Fu - ooh, ages and ages ago. OK, so this isn't the greatest example of Kung Fu fun, but it is quite enjoyable while it lasts - even if that isn't all that long.

The graphics and sound aren't a patch on IK+ and the action isn't all that tough to control but somehow Fist+ just grows on you. Still, IK+ would probably grow on you more... If you just want one really good Kung-Fu simulator, this probably won't be the one.

On the other hand, if you're a bit of a karate chop freak, at least give this a whirl.

Presentation 44%
Below average title screen, no real front end, but there are one and two player options.

Graphics 69%
Competent sprites and animation. Backgrounds aren't much to look at, though.

Hookability 72%
Playable and even mildly addictive once you've mastered the sixteen moves.

Lastability 67%
There is some urge to reach Tenth Dan, but after that there's only an improved score to keep you playing.

Overall 68%
A good but expensive beat-'em-up, and not as polished as IK+.