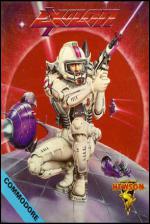 As an explorer, you're used to living a life of danger - but you've never experienced anything like this. At first all seems quiet, but suddenly all hell breaks loose. Strange aliens begin to attack, and guns and gun emplacements emerge from underground and start firing. Now you have to reach your ship and escape - a task which requires travelling through 124 flick-screens.

The hero is armed with a hundred-round laser rifle which is used to despatch the many flying aliens, and ten grenades which are thrown at the machinery and rocks which block the way. Extra ammo is picked up along the way, with the supply also replenished when one of your nine lives are lost.

The action is viewed side-on, and the hero is guided from left to right across each screen - there is no turning back. Some screens are bare, apart from swarms of flying aliens. Others are crowded with machinery or deadly guns which take aim as soon as the hero comes near. Mines and hydraulic plungers also appear from below the planet's surface and have to be jumped.

Occasionally a dressing unit is encountered. This is entered to add an exoskeleton and double laser rifle to your armament. When 25 screens are traversed, a bonus is awarded and the mission continues until all nine lives are lost, or the safety of the ship is reached.

The style of graphics in Exolon is very reminiscent of the other Hewson game this month, Zynaps. They're quite pleasant, and have a strange storybook quality about them (the animation on the main character is uncannilty like sometime out of a Czechoslavakian cartoon!).

The game plays well, but again follows Zynaps in that it can be frustratingly difficult at times. This isn't necessarily a bad thing, but it can be offputting at first, the collision detection also seems to be on the time sight, and this combined with the generous amount of aliens wobbling about means that some screens are definitely not for the faint of heart.

Ardent arcade adventurers may well find a rather decent challenge in Exolon.

Although this offers nothing new, Exolon is quite enjoyable and offers a fair amount of challenge for those willing to persevere. Getting to the spaceship should take a lot of practice - it gets really tough on later levels, with plenty of hazards and swarms of aliens keep at bay.

The backdrops and main sprites are excellent, and the sound effects match the action perfectly. Exolon might not be state-of-the-art, but at least it looks good and offers a challenge.

Hewson have exhumed the old flick screen Green Beret-type format and given it an airing with this insipid and tedious exploration/shoot-'em-up game.

I can't see anyone managing to get through all 125 screens, not without months of practice, and there just isn't enough in it to deserve that sort of perseverence.

The action or graphics hardly vary from level to level and the urge to see what's beyond the next screen is minimal. The graphics and sound effects are great - but if it's action, playability and variety you want, try Hewson's other release this month.

Sound 61%
Great sound effects, but the title tune is naff.

Lastability 51%
Negotiating the 125 screens is a tough job, but the little reward offered means that the action eventually palls.

A competent shoot-'em-up which lacks variety.