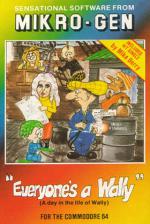 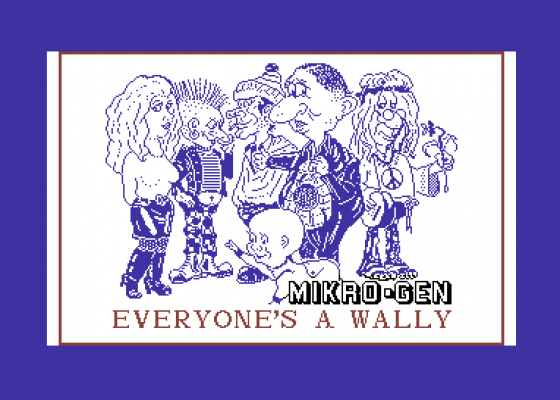 When Pyjamarama was released, it broke new ground in arcade adventures with its brilliant use of objects to set teasing puzzles. Everyone's a Wally takes its predecessor a stage further in gameplay, and is the first arcade adventure to feature multi-character control.

The game looks a feels like Pyjamarama - the graphics are excellent, with large, colourful, varied locations, and five high-res well-animated characters. But being able to control these characters adds a new dimension. Each of the characters has their own particular skills (see panel), and if left uncontrolled, a will of their own.

The game is set in a town of about 40 locations (each a different screen), and some 40 or so objects lying around, for example a parcel, an empty bottle, and a monkey wrench. Working out what to do with these is the aim of the game. 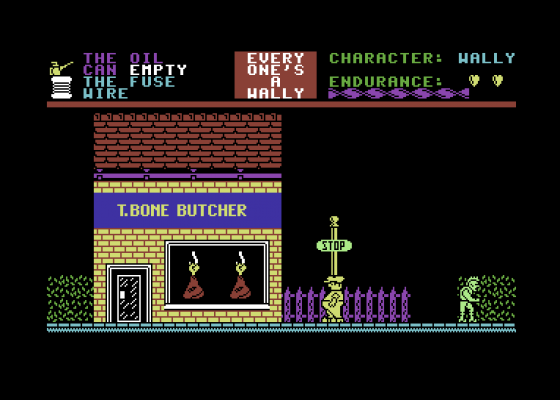 Different types of nasties occupy some of the locations and move around screen in predictable patterns. For example there are a pair of postage stamps floating around in the post office.

Most of the objects have a useful function, while some are red herrings (in fact one actually is a red herring). To pick up an object, you simply walk over it or jump through it. Only two objects can be carried at one time, and will be displayed at the top of the screen.

These objects must be used to complete various jobs, such as stamping a parcel to be taken to the docks, building a wall, and mending a fountain. This is where the problems start - certain tasks can only be carried out by certain characters. These are usually dependant upon their trade and, just to help you out, there just might be one or two clues scattered about this page. 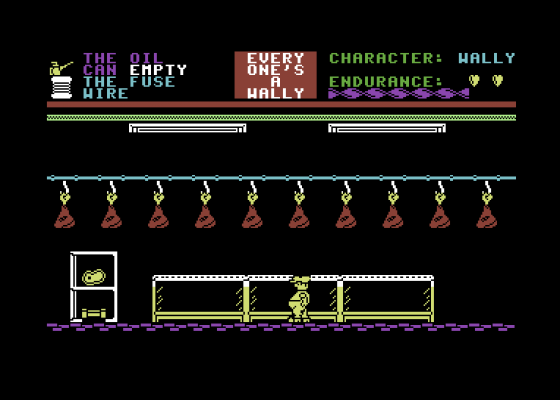 Whenever someone finishes a job they get paid a certain amount depending on the complexity of it, and it goes towards the gang's pay. When a certain amount is reached, then tea breaks are awarded.

There are five main jobs to be done, but each can only be finished by previously completing simpler tasks. When you do actually finish a major job, you can get a letter towards the combination of a bank safe. The letters must eventually be taken back to the bank and used in the correct order to open the safe. The gang can now have their well-earned wages, and you can get the glory of completing the adventure.

You start the game in the town square with control over Wally. If you wish to control another character, you must first occupy the same location as them. Pressing the corresponding number key will then transfer control to the required character. If the relevant character isn't present, then selecting their number will just give their current position. 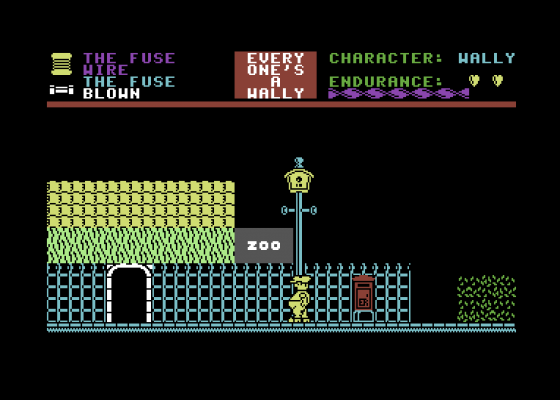 The five characters have individual endurance factors, in the form of three lives. Contact with anything nasty will decrease their endurance until a life is lost. When all three lives are gone, then the game is over. But if one character is close to death, you can always switch to another and continue the game.

Fortunately, there is food lying around which can be eaten to boost endurance. Unfortunately, each character, excluding Wally, is fussy about what they eat, and some foods are better for them than others.

After considerable time spent playing the game, we are able to give this brief run down of Wally and his bumbling gang of four (no, not the SDP):

This is a lot harder to get into than Pyjamarama ever was, and may prove initially off-putting to most. It's worth persevering, though, since once you do get going and actually solve a few problems it becomes extremely compelling. You don't happen to know what the red herring and tin of baked beans could be used for, do you?

Pyjamarama was criticised for being ultimately too simple, but that certainly can't be said of this follow-up. The familiar format means players of the first game will feel at home, but the multi-character control and new tasks will pose everybody a challenge. Getting started may be frustrating, but once the tasks start to get solved you'll have hours of fun and fury cracking each job.

Hookability 66%
A lot of initial frustration and puzzlement.

Value For Money 82%
Another great Wally of a hit from Mikrogen.

Getting started may be frustrating, but once the tasks start to get solved you'll have hours of fun and fury cracking each job. 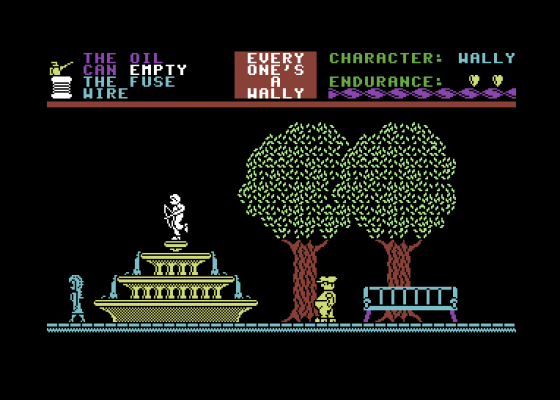