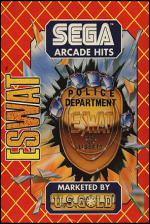 Cyber City is the latest American metropolis to fall under the control of criminal elements, but rather than calling Robocop, Don Johnson or the Narcs, this city has developed its very own supercops. Department ESWAT (Enhanced Special Weapons And Tactics) is an elite division of the Cyberpolice - you know, the one where the *really* big guns are! Of course, it's your aim to get promoted from being a regular SWAT cop to being an ESWAT cop. Missions are so tough nowadays that just one patrol earns promotion, firstly to captain then assistant chief and chief before finally making it into ESWAT. Here you are outfitted in the very latest in cybernetic exo-suits, double-laser cannons and the option to upgrade to mega-weapons.

The pursuit of truth, justice and gross-out body counts is shown side-on in a horizontally push-scrolling urban jungle. As one or two cops march rightwards, criminals rather stupidly rush them from left and right. Wiser crooks snipe from windows, while at the end of most levels there's a super-baddy to be dealt with. The cops can shoot upwards to take out snipers, or alternatively jump up onto the platforms to attack them from the side. Once transformed into an ESWAT cop, the villains start dropping all sorts of superweapons which can be picked up and used. These tend to be of the smart-bomb variety and are activated by the Shift keys.

On the Amiga version, men have three units of energy to lose before dying, and very little ammo so picking up bullets is essential. By contrast, the C64 has no energy units but more lives, and so much ammo that magazines are unnecessary.

Let's take the coin-op first. A derivative shoot-'n-beat-'em-up with no real innovations. Now take the conversions (please do!). The C64 game features small, unattractive sprites with some extraordinary glitches - one baddy even appeared to have his legs separated from the rest of his body!

And when I was standing on a barrel (well it looked a bit like one!), the baddies killed me by shooting at its base! There's also no interlevel presentation; just a sort of hiss and a confusing switch to the next scene.

The Amiga game fares little better with dull interlevel screens and very pale graphics. It also has the odd glitch, the most humorous of which was when an arm appeared from nowhere to embrace a rescued girl!

As for playability, both versions are sluggish and repetitive without a hint of excitement.

Graphics 63%
Generally bland, washed out graphics although sprites are big and animation is acceptable.

Hookability 57%
Easy to get into, although sluggishness prevents real addiction.

Graphics 61%
Colourful but unsophisticated backdrops and adequate sprites, but also some glitches!

Hookability 60%
Again, very easy to get into, possibly too simplistic...