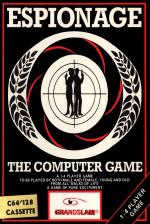 All you would-be spies out there, get your black hat and... hold on, I've seen this somewhere before [That's because you wrote it in the C64 review, Maff - Ed]. Oh yeah, that's it. Oh well, all there is to say is that the Amiga version of Espionage has just about the same sort of plot as the C64 version, really. So if you want to find out more information about the game then you'd better read the review on page 16.

Well then, what are we ging to do with the rest of this page then? Anyone know any good spy jokes? Oh, here's one... there was an Irishman, a nun and a spy and they were in this shed... [That's quite enough of that - Ed]. Alright then, on with the comments...

After listening to Maff and Gordo moaning about the C64 version of Espionage I thought "It can't be that bad." Unfortunately, it is. The Amiga version is certainly an improvement, with speedier gameplay, better appearance and jazzed up music (no sound effects, though), but it's still not all that it should have been. If a board game is to work on a computer, then it has to go overboard with the presentation or alter the gameplay totally. Unfortunately, Grandslam have done neither. Sorry, guys, but it's not quite there.

Having played this after the pretty weak C64 conversion of Espionage, I can better assess the improvements. The speed of the game has been increased, so you're not left hanging around waiting for your go, and the whole thing is clearer and easier to understand. Another point is that you can work out the likely strategies of the computer player (not that they always do what you expect). I still don't see a great deal of point in putting a board game onto a computer if the single player mode isn't very good - and for this reason (as well as the extra cost) the Amiga version doesn't score as highly as it might.

Presentation 51%
Clear layout and some options, but there should be a lot more glossy wrapping.

Graphics 49%
A fair representation of the Espionage board and symbols, but where are the animations and pictures to liven it up?

Sound 73%
Great music which plays throughout; no sound effects.

Hookability 59%
As tricky as any board game initially; once learnt, you'll play for a while.

Overall 58%
An average board game conversion, but without the necessary pazazz.

In-game presentation sucks... It's only good for two or more players, so buy the board game instead.