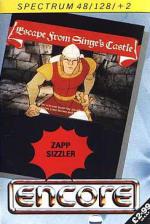 This Encore re-release puts you in the chain mail of Dirk the Daring, on a quest to enter the castle of the despotic Lizard King and "do him over, good and proper-like". This means fighting his way through eight separate parts of the castle, each one being a different subgame. Some sections are puzzles, others are more action-oriented, but, as in the laser-disc coin-op, all of them require you to learn a sequence of moves before they let you pass.

However, unlike the first Dragon's Lair game, there's rather more to playing Singe's Castle than pushing the joystick in exactly the right direction at exactly the right moment, so it's much more fun. The nice graphics and sound add their two-penn'orth to the enjoyment too.

Less colour than the Amstrad version and the games come in a different order. Pretty good stuff.

Smart and playable translation of the laser-disc coin-op. Much more fun than Dragon's Lair.