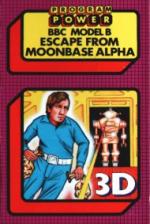 Games to a software reviewer can be like bottles of booze to a wino. It's a rare game that offers genuine refreshment. Escape From Moonbase Alpha has the exuberance of vintage champagne.

It's an adventure game, which starts off with the familiar premise that you have been abandoned on a moonbase that has many rooms and floors. Your only means of escape is to find the Doctor, hiding on the seventh, and deepest floor. For ten bags of gold, he'll take you away in his police box.

Finding the Doctor involves wandering through the rooms and down staircases, battling or avoiding monsters, collecting gold and conserving your strength, and so on. If your strength falls below zero, you're a gonner.

Being left alone on Moonbase Alpha doesn't mean you're going to be lonely. The place is a-buzz with things, mainly bad. There's demons and wizards, and creatures that sit on your head and kill you.

There's a robot called Marvin, boring people to death, and Doris the monster, who looks like a TV set on legs, and who wants to turn you into a frog. One way of dealing with such things is to take a Hulk-pill, and get very strong and green for a while, able to walk through walls.

Hopefully, you'll find money bags there, which, if there's no monster around, you can then chuck down a chute into your savings.

The game is full of interesting happenings and characters. Many of the characters seem to be doing part-time work between TV series, and it's worth playing the game just to meet them. Sound effects are good, the game often requires speed, and 3D is simulated with simple but amusing graphics.

And, of course, the game is a real adventure, requiring mental maps to be made.

Escape From Moonbase Alpha is packaged nicely, but the packaging is deceptive. The program inside has a rare effervescence. It is witty, frustrating, and intelligent - which makes it one of the best I've ever played.

Witty, frustrating, and intelligent... One of the best I've ever played.