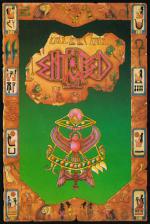 Usually, when Ultimate releases a new game, it's an instant rave. Entombed will follow this trend, but I feel this will only be because Ultimate has a good name.

The story is that Sir Arthur Pendragon has discovered the Eye of Osiris, an Egyptian magical relic. However, whilst discovering this, Sir Arthur has become trapped in the Temple. The idea is to explore the temple and escape. To aid you there are two objects to be found; a magical whip (shades of Indiana Jones) and a torch.

The whip can be used to bump off the mummies, cats, bees and flies which assail you constantly in the corridors. The torch is used to illuminate rooms which are in darkness. A rather nice feature of the torch is that the beam must be directed about the room in order to see anything.

The game also features crows which restore life energy depleted by the mummies, etc. It took a knowledge of Egyptian mythology to work this out because Osiris was part crow, however later the crows gave the game away by carting Ankh symbols around.

After wandering around with the mummies and flies for a bit you usually find a doorway leading into a special chamber, the first has three walkways with rolling balls on them. If you survive this, you will obtain the magical whip and the second room contains the torch.

The graphics are very good with lots of very pretty Hieroglyphics on the walls and well animated monsters. Sound is well implemented with especially good whip sound.

However, have said all this, I found the game very boring and, in the early stages (before whip), very difficult. Such nice graphics - shame about the game.

Other Commodore 64 Game Reviews By J.G.D.

Such nice graphics - shame about the game.