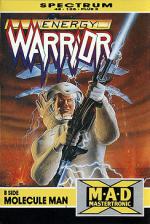 It is the year 2079 and the decaying, polluted Earth values more than ever its precious few acres of unspoiled nature. As a warden, you are responsible for maintaining the health of one such area.

At first all you had to do was some tidying up and the herding of animals, but now things have changed. A distant star has become a supernova, and Wavaren, creatures that inhabited one of its encircling planets, have found a new home - in your reserve. So your job description has been rewritten to include their destruction.

The reserve consists of forest, ocean islands and rocky desert; these three regions are further divided by force fields into ten areas, with aura energy maintaining their original condition in each. But the presence of Wavaren reduces this energy, and if it ever reaches zero, the area dies. And if three of a region's areas are wasted this way, you've lost.

The Wavaren dly around in an aerial cornucopia of jellyfish, fairy cakes, molecules and rotund craft, showing off and manoeuvring around your small fighter as it skims above the horizontally-scrolling landscape.

Your fighter is equipped with forward-firing lasers - it may take a few blasts before some robot craft succumb - and several blitz bombs that annihilate all the Wavaren on-screen.

When some Wavaren vehicles are destroyed, a series of icons temporarily appears and other sections can be reached, your life substance increased, extra bombs acquired or your fighter's power improved.

They never told you environmentalism would be like this when you joined the Green Party...

Though graphically quite good, with neat backgrounds, Energy Warrior has little content. Horizontally-scrolling shoot-'em-up are all very well, but unless there's some remarkable feature, they can be quite dull and unplayable.

Energy Warrior is a pretty ordinary horizontally-scrolling shoot-'em-up, quite playable but offering nothing original. There are plenty of landscapes, but they're all slightly too easy to complete; it's just a matter of finding a safe place and learning the attack formations, which soon becomes tedious.

Graphically it's reasonable with smooth but slow scrolling and fairly well-drawn and detailed sprites (they're a bit bland though). The backgrounds are colourful and varied, though slightly garish, and each level has its own character and atmosphere.

Molecule Man, the B-side game, is much better.

A pretty ordinary horizontally-scrolling shoot-'em-up, quite playable but offering nothing original.
Logout