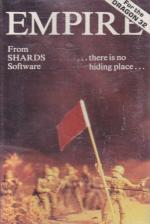 Based on the Diplomacy type of board game, Empire challenges you to dominate the world. The world it speaks of is divided into six continents and 39 countries - thirteen going to neutral forces, thirteen going to the Dragon, and thirteen to you.

Good, neat, clear graphics are used, and sound is used only where necessary. Empire is an easy game to load, with a concise and logical set of instructions, and your objective is to beat the Dragon's armies - the neutral countries are there only as an obstruction.

Operation is keyboard only, and only one player can play at a time. Having chosen your thirteen countries, you place your 26 armies on them, wherever you wish. The Dragon will then do the same, and start attacking.

When you eventually get control, you get extra armies to allocate, based on the number of countries you hold, plus one for each victory, and one for each continent.

Armies can only be moved on victory and then only through beaten countries.

Empire is a great game to play, demanding concentration and time. But a joystick version would help.

Other Dragon 32 Game Reviews By JB

Empire is a great game to play, demanding concentration and time.