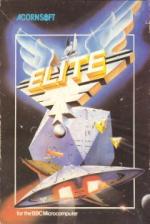 The first thing you'll notice when you get a disk copy of Acornsoft's latest release Elite is the size of its packaging. It's big. Open it and you'll find a colour poster, a function key strip, a chart, an entry form for the Elite competition, a 65-page flight manual and a 50-page book.

The book is a short but gripping sci-fi novel called 'The Dark Wheel'. You don't actually need to read this book to play but it helps to set the scene. The flight manual, you definitely need to read because Elite is a hideously complex but absorbing strategy/arcade game and you wouldn't have a clue until you've read it thoroughly. Let me explain.

You are in control of Cobra Mk-III, a highly manoeuvrable. medium-range, medium capacity fighter/trader. As you fly around between the stars trading various goods, you'll live with your combat rating. You will begin as Harmless. If you survive your first skirmish, you may be reclassified as Mostly Harmless but on the slow climb up the status ladder that reflects your growing talent for combat, you will have to engage many different ships in many different skirmishes in the system space of different worlds.

You will be classed as Poor, Average, Above Average, building up to Competent, Dangerous, Deadly and finally Elite. These ratings do give an accurate description of your ability to play the game.

You begin on a planet in one of the eight galaxies and must decide which planet to travel to in order to trade. Your choice (which is made on a detailed map via the cursor keys) will be influenced mainly by your fuel status, political profile and the inhabitants of your destination planet.

Unfortunately, during your voyage across space, you are likely to be attacked by countless numbers of pirate ships who will blow you into a million pieces - you'll find that it will take a few goes to get the feel of the controls.

All the arcade action - zapping alien ships and docking with space stations - takes place in the most breath-taking 3D graphics I've ever seen. The way in which the missile seeks its prey and twists and turns after the helpless victim is a joy to watch.

On the strategy side, there is the trading by which you can equip your ship with awesome weaponery such as ECM systems, pulse lasers, beam lasers, energy bombs (which simply destroy everything in sight, equivalent to smartbombs in Planetoids) and so on.

If you want, you can get rich quick by trading in contraband goods and destroying innocent ships. But then you'd better watch out because the Police Vipers will be onto you.

Unfortunately it would take too long to explain all the details of this vast and sophisticated game (there are eight galaxies, each of which contains 250 planets!!!).

The presentation is well up to the usual Acornsoft (pre-JCB Digger) standard with all the usual features including freeze and sound on/off.

You might have withered at the sight of any of the big exploration games Atic Atac, Sabre Wulf, Jet Set Willy and Quo Vadis for example, but since the data files for the planets in Elite are loaded from disk as they are needed, you don't have to make do with the titchy memory capacity of the Beeb.

Elite is vast, complex and very, very absorbing. I've got bulging, red eyeballs from staying up into the early hours but don't care. I'm going to continue playing until I'm ranked Elite or at least Competent... or even Average... Buy it!

The only thing that could stop BBC owners buying this game is the somewhat daunting mass of information that comes with it. If you press on and take the time to find out about the game, you will find yourself plunged into perhaps the best game ever seen on the Beeb. The spacecraft and background are marvellously sharp and move beautifully about the screen.

This game really does have everything - strategy, action, amazing graphics, good sound and playability.

I liked the ratings you're given, from Harmless through to the final Elite.

The number of options mean that it has fantastic lasting interest - indeed, you might drop dead from exhaustion before you put it down.

Goodbye Earthbound mortals, I'm off to fly to the stars.

Don't be put off by the price. This is a game well worth saving up for - better than two or three ordinary Beeb games.

After a pretty quiet year, Acornsoft have excelled themselves. From the moment you get your hands on the package, you know it's going to be something which will absorb you for hours.

Graphics, playability, depth - the game can hardly be faulted. It should be pointed out that we haven't yet seen the cassette version - it's not clear whether this contains the same game and, if so, whether new sections must be loaded in at regular stages.

That reservation apart, it seems clear that BBC owners now have a game unrivalled on any micro.

BBC owners now have a game unrivalled on any micro. From the moment you get your hands on the package, you know it's going to be something which will absorb you for hours.