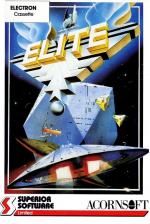 Hey! There's a great new game on the market called Elite. You play the role of an interplanetary trader flying a Cobra Mk3 who spends a great deal of time shooting up pirates - what do you mean, you've already got a copy? As a result of the Acornsoft/Superior Software alliance, Elite has been relaunched! It is now sold in a sturdy plastic case complete with a revamped manual. Not only that, it is cheaper than before.

Elite is a game which is best categorised under the heading arcade/strategy. Using shrewd financial wheeling and dealing you earn money which can be used to improve the standard of your spaceship.

You start the game with a Cobra Mk3 Popular, equipped with a pulse laser, a small cargo bay and very little else. Following a few nights of hard graft you should have upgraded her to the Ghia version with beam lasers, large cargo bay, docking computer, energy bomb - the list is endless. You will then be in control of one of the fastest, meanest fighting machines in the galaxy.

Your adventure begins on a space station orbiting the planet Lave. All planets are given a rating as to how far they have developed technically. You can use this to indicate the probable price of goods - on a low-tech planet, furs will be cheap but computers expensive and vice versa for a high-tech planet.

Once you're confident enough you can try your hand at dealing in narcotics when the rewards - and the dangers - are higher.

Even by today's standards, the graphics used in Elite are excellent. Once out in space you enter a world of three-dimensional line drawings, most of which are out to blow you to pieces. The dogfights are a delight and you'll need every ounce of cunning and skill if you are to survive.

Each kill you make adds to your skill rating. Starting off as "Harmless" you must face many a sleepless night if you are to reach the dizzy heights of the "Elite".

Elite has been off the market for over a year, so it's likely that there are a number of new Electron users out there who don't own a copy of what is quite simply the best game for the Electron.

This is quite simply the best game for the Electron.