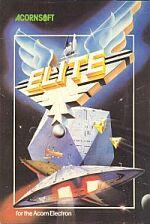 It would be an understatement to say that this game has aroused a lot of interest in the computer world. It has already become Acornsoft's best-selling game and is fast becoming a cult. So much so that it has left owners of certain other machines wondering when they will get their hands on it!

It comes in the most comprehensive packaging I have ever seen for a piece of software. Apart from the tape itself, there is a 64 page manual giving details of the game keys (there are 47) and a short novella "The Dark Wheel" which is meant to whet your appetite for the game. There is even a ship identification wall chart! All this makes the somewhat expensive price look quite reasonable.

You play the part of a space trader roaming the galaxy selling your wares from planet to planet with the view of making as much money (or credits) as you can. There credits can then be used to equip your Cobra MkIII space ship. Things to buy include an extra large cargo bay, an extra energy unit and docking computers (essential as manual docking is very long and difficult).

You can also gain credits by shooting down pirate ships and the many asteroids that float aimlessly about. Shooting down innocent traders or dealing in illegal items (narcotics and slaves) reaps you large profits. Unfortunately, it also brings you to the attention of the police Viper ships.

The kills contribute to your rating, which ranges from harmless through mostly harmless, poor, average, above average and competent. As your bag grows next comes dangerous, then deadly and finally, after a lot of shooting, you become one of the elite. Fortunately, there is a save game option, enabling you to rest your aching fingers.

You may think that having to use 47 keys in its playing makes the program complex and difficult. This is not so, as many keys are only used on certain occasions. Having said that, I must admit that I found flying my ship quite difficult.

The 3D graphics are stunning and the sound well above average. The game has an addictive quality which keeps you at the keyboard for hours on end in the hope of achieving elite status. No software collection is complete without it.

No software collection is complete without it.