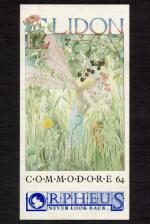 Elidon is a land of fairies, or Faeries, who tend the seven flowers of Finvarra which are woven into a garland for the fairy queen. All is not well at the bottom of the garden, the seven potions which will make the flowers bloom are scattered around the Kingdom. As the only mortal to be allowed to consort with fairies, you must guide the fairy around Elidon to fulfil the quest before dusk.

Compared to most arcade adventures this may seem like a soft option, but if that's your view then you 'll miss out on a rather entertaining, beautifully animated game.

Elidon is represented as a maze of interconnected rooms full of dangers and rewards. The greatest of these rewards, as far as the player is concerned, is Faerie dust which restores your Faerie to full strength and preserves her life a little longer.

Apart from Faerie dust and the lost bottles of potion there are many other items which can prove useful. For example, there are many unlit rooms which harbour dark secrets guarded by luminous, evil, blinking eyes. Carrying a torch can be very useful in these situations. Objects must. be chosen carefully because a Faerie can only carry three items at a time, and the kingdom is so wide ranging that a map is necessary to relocate an object which may prove essential later.

The graphics are attractive and the music is Grieg which conjures up images of Nordic magic. You learn the rules as you play the game, as with all adventures. Try it.

The graphics are attractive and the music is Grieg which conjures up images of Nordic magic.