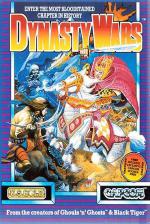 Fight off the clans of ancient Japan in the 8-bit conversions of the Capcom coin-op. There's a choice of four warlords to play, and after selecting whichever has the right combination of physical and magical strength, mount up and charge into oncoming hordes of foot soldiers, archers and cavalry.

The Spectrum and Amstrad conversions are nicely done, though the visible playing area is quite small and the detailed sprites are quite difficult to make out against the like-coloured ground. The C64 version looks like it's played in a quagmire, though, with dull grey warriors rampaging about a mud-brown battlefield. For some reason, the unusual gameplay isn't instantly appealing, so unless you loved Dynasty Wars in the arcades this isn't really worth scouring the shelves for.

Ghastly colours make this version look very ugly, but it plays just like the others.

Pretty good conversion, apart from the camouflaging effect of the monochrome colour scheme. Worth getting if you liked the coin-op.

Similar to the Spectrum game but without the colour problems. The best of the 8-bit conversions.

For some reason, the unusual gameplay isn't instantly appealing, so unless you loved Dynasty Wars in the arcades this isn't really worth scouring the shelves for.