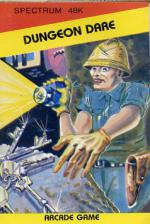 A double-sider of dubious quality from Central Solutions. It might have you in two minds - bin it or swop it!

Dungeon Dare is not a bad little mixture of platform and maze arcade. But a dose of sound effects don't cover up the dearth of imagination involved in the program. Basically you're an explorer trapped in a dungeon, except the graphics prefer to show you as a green blobby thing. You wander in and out of rooms spread over sixteen screens collecting the 38 (or is it 46 - they can't make up their minds) keys necessary to escape. Along your merry way mind the monsters and munch the energy pills - energy loss is a big enemy. The little buggies have a constant horizontal/vertical motion so it doesn't take long to learn how to evade them. Not for the experienced gamer - though I must admit games like this can have a mesmeric hold.

And the tape'd be better without Classroom Chaos - a graphic adventure of such monumental boringdomness that any school lesson would seem thrilling in comparison. The school's Gold Cup has been stolen (the bell was the only thing that went at our school) and the head thinks it was you.

The game bears no relationship to the crop of school goodies like Skool Daze and Mikie out at the moment - but is designed for goody-goodies, toadies and anoraks, which of course no self-respecting Speccy owner would claim to be. People like that own BBC's.

Bears no relationship to school goodies like Skool Daze and Mikie; it's designed for goody-goodies, toadies and anoraks, which of course no self-respecting Speccy owner would claim to be.