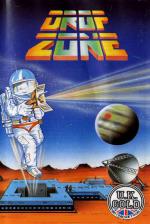 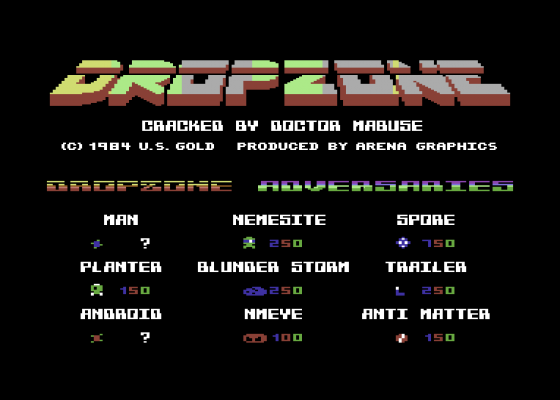 A futuristic space battle with roots in Defender and Jetpac comes to your screens in this absolutely brilliant shoot-em-up.

The game places you in a similar scenario to Defender - fighting enemies above a two-way scrolling landscape. And the character you control is straight out of Jetpac - an armed space-man equipped with a jet-powered backpack. But it's the differences that will get the blood pounding through your temples.

For a start the graphics: they make Defender look prehistoric. The single-line planet surface has been transformed into a realistic, rugged terrain, covered in volcanic craters and lava pools. Yet it scrolls every bit as fast and smoothly as in Defender. The aliens (there are nine species instead of Defender's six), your character, and the scanner, are also graphically much more detailed. 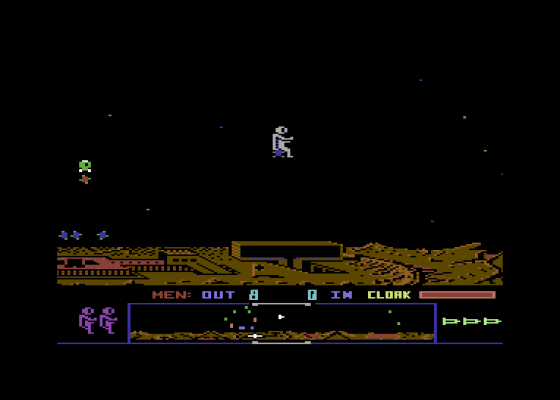 Then there's the scenario. Although superficially similar to Defender in that you're trying to protect scientists on the planet surface, the task this time is more complex. Instead of being carried away by landers, the men are under threat from Androids which are deposited on the planet surface by Planters (see accompanying box). Your job is to rescue the men before this can happen, and to destroy all the planters and other aliens. Once all are destroyed, you receive bonus points and then a new, more difficult wave of enemies.

The rescue takes place like this: the scientists roll along the planet's surface in spherical survival pods. By flying into them, you automatically pick them up. Then you must carry them (one at a time) to the relative safety of the planet silo. By moving over the 'dropzone', a moving cross-shaped platform, the men are automatically dropped off and roll into the silo.

If by any chance you lose all your men, you'll be in real trouble because the planet starts to erupt - the volcanoes spew out white hot rocks and all the aliens turn into anti-matter which bounces about, making it very hard to stay alive. What's more, you won't get a new set of eight men until the next fifth or tenth attack wave. 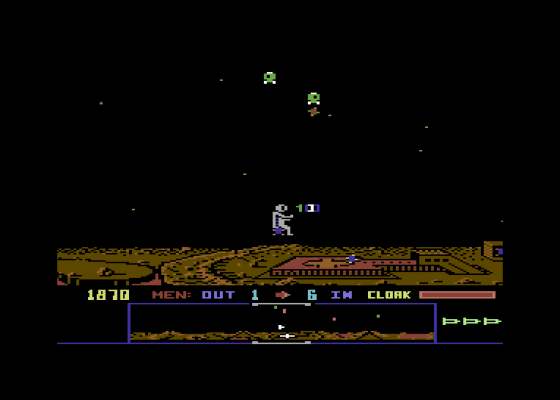 Although sounding a formidable task, your Jetman has excellent armament. Firepower is superb: massive rapid-firing laserpower, space-bar activated smart bombs (which, as in Defender, destroy everything on screen), and an 'inviso cloak' (to activate, hit any key apart from the space-bar) which will allow you to go through everything including your men! Although the cloak is a vital defence, it can only be used for a short amount of time before the inviso power runs out. After each wave it will be replenished.

Underneath the main screen display there is a superb scanner - a miniature display of the whole planet, which you can use to see all the trouble spots and where the action is at. The scanner is so good, it's almost possible to play Dropzone without looking at the main display!

The attack waves are of two sorts. NORMAL waves feature all the aliens complete with androids, planters etc. TRAILER INVASIONS come every fourth wave (see box). These are very tough and require some solid blasting to survive. You still have to collect the men and take them to the dropzone, only this time there are no planters and androids . . . well, not until the higher levels where the fun really starts. 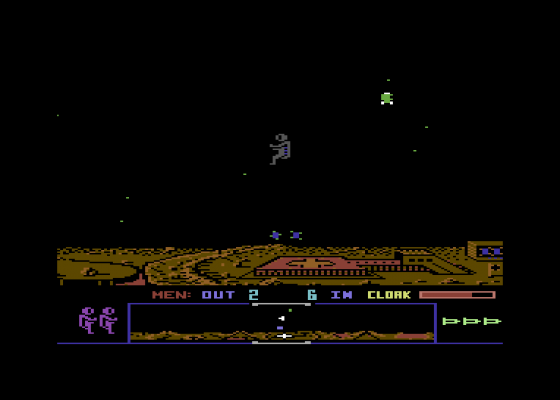 Fortunately, every 10,000 points you receive a new life and a new smart bomb (three of each to start with).

At the end of a game you are also given a rating, from the lowliness of 'practice recommended' to the highest I've achieved: 'mega-star'. I'm not sure how far the ratings go, but they are many and humourous.

Game feel is excellent and has fantastic control potential for an experienced Dropzoner. You have four-way joystick control over the Jetman, but you have to allow for his inertia and also the effect of the planet's (weak) gravity field. 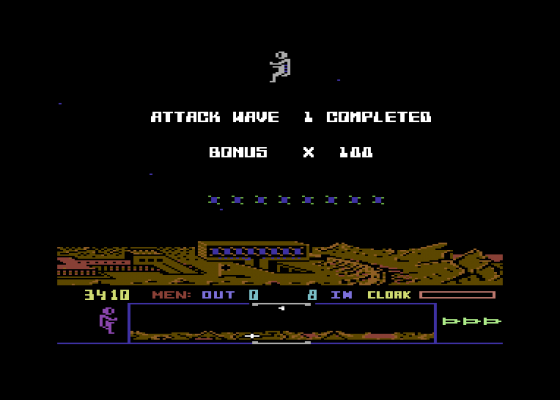 Sound too is ace: arcade quality blasting which is loud, original, and varied, and really adds to the game.

Any shoot-'em-up fan who doesn't have this game as pride of place in his software collection is either a total wimp or needs to undergo psychiatric treatment now!

Dropzone is, quite simply, THE shmup on ANY micro. The combination of fast action, excellent controls, brilliant inertial effects, and alien variety, make this a compulsive and exhilarating masterpiece. Excuse me, but I can't spend anymore time writing trivial comments when I've got Dropzone to play. 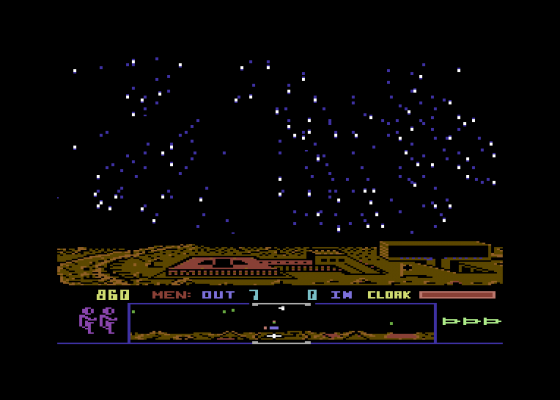 Simply a dream come true: at last a really brilliant shoot-em-up on the 64 which will keep any megablaster happy for months and months. If you are good at Defender you'll find your tactics work really well here, if you are a novice then it'll take time to learn how to play this game really well. But whoever you are, you should go out NOW and buy it, it's *%?£!!! amazing.

Defender has long been the ultimate shoot-'em-up, the best C64 version being Guardian, but now even this classic arcade game has been surpassed. Dropzone has tremendous action and, unlike its predecessors, has inertia control that even I found a joy. I still found it really tough, though, and will be battling with it for months to come.

There are nine different things which can kill you, eight of which rove around the planet. Each has special missions, which all ultimately end in your destruction:

PLANTERS. These are the most basic of aliens, although they have the most important of tasks. They roam about above the planet surface until they find a man. When they do so they'll produce an ANDROID, a small red sphere, which they start to lower onto the surface of the planet. If the planter reaches the planet and drops the android off, the planter then mutates into a Nemesite (see below). Meanwhile the android will roll along the planet surface until it finds a man. When it does so it'll self-destruct taking the man with it. If there are no men left on the surface, it will roll along until it finds the silo and enter, destroying a man. Needless to say, you should destroy the planter before it drops an android. You are aided in this by the shrill squeak emitted by the planter when an android is produced, plus the fact that the android appears on your scanner and an arrow indicates which way you should fly to find it.

Incidentally, on higher screens the planters exhibit highly intelligent behaviour, hunting for you in gangs but fleeing rapidly should you prove a mean shot.

NEMESITES. These mutated planters come roaring after you as soon as they develop, and will track you relentlessly at high speeds whilst chucking bombs around. 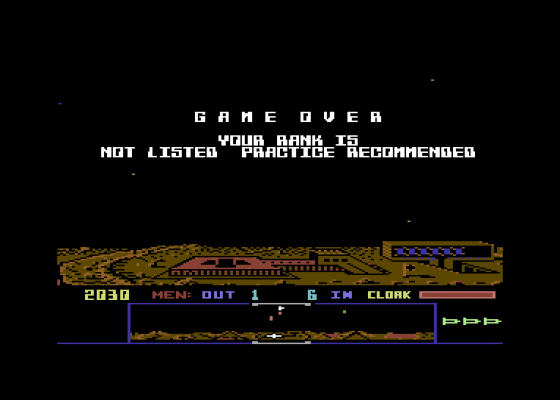 BLUNDER STORM. Impressive-looking clouds which float about the planet dropping acid rain or belting out huge thunderflashes. Needless to say, these are both fatal to the touch.

TRAILER. A small spherical, spiny horror, which floats about harmlessly until you shoot it. It thereupon bursts into...

SPORES. These thin comet-like objects follow you about, emitting excited squeaks. They're very hard to hit and should be killed on the spot. If you leave them you could run into them, as they're very difficult to see at high speeds. 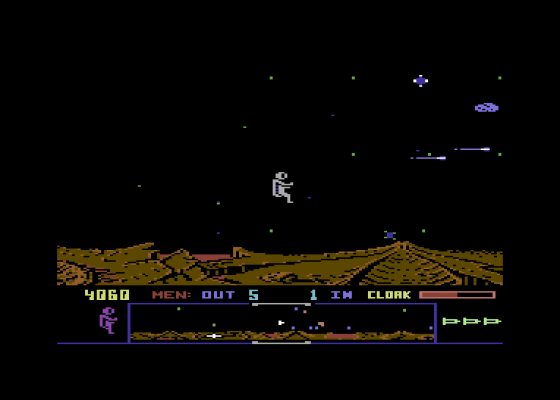 NMEYE. This evil red alien is equivalent to a baiter in Defender. Take too long over a wave and it will appear, track you relentlessly at super high speeds firing like crazy. If you start to get these (unavoidable on high levels) prepare to fight for your life.

ANTI MATTER. This stuff appears after you've lost all your men. It bounces about dropping bombs all over the shop, and is generally a real pain in the neck. Laser like crazy to get rid of this stuff.

VOLCANOES. These start erupt after you've lost all your men. They hurl out deadly white-hot rocks at a furious and horrific rate. If you have to pass them, then climb to a high attitude.

Dropzone has several touches which add real class to the game's atmosphere.

1. As your jetman zooms about the planet's surface, you can see him working the controls of his jetpack, while his legs are pushed back as he accelerates.

2. At the end of a wave he raises a hand and gives you the thumbs-up. Well, you need all the encouragement you can get!

3. On the high-score table, the top scorer has his name displayed in large, glowing multicoloured letters. Really makes you want to go for those highscores.

4. When you die you explode into thousands of little pieces in a great firework display, one of the most impressive explosions anywhere.

Originality 53%
Based on Defender but with new aliens, new scenario.

Hookability 97%
Fast blasting that's so compulsive you won't be able to leave it alone.

Sound 61%
No music but lots of great effects throughout.

Lastability 96%
The waves are still getting harder at one million points.

Value For Money 95%
Shoot-'em-up fans can't afford not to have this one.

Shoot-'em-up fans can't afford not to have this one. The waves are still getting harder at one million points. 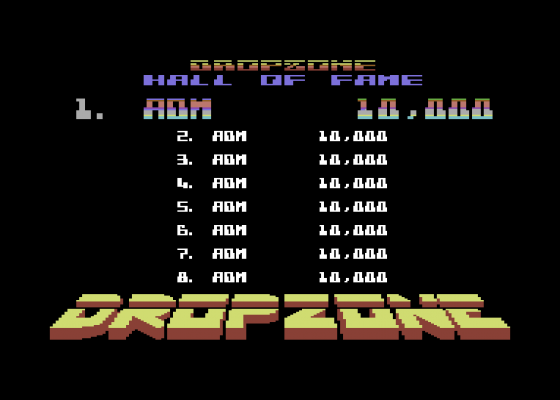