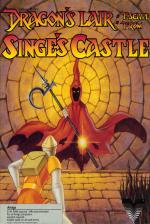 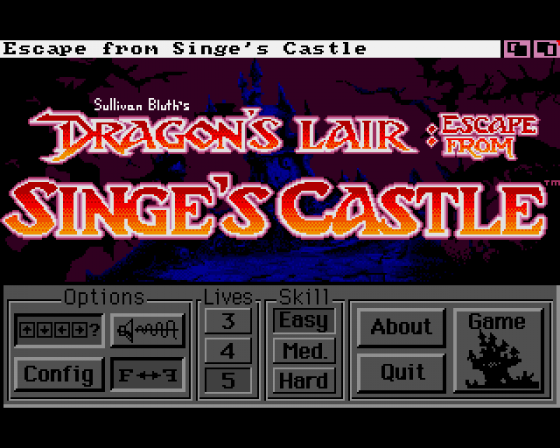 Dirk the Daring's last Amiga appearance saw him halfway through his brave quest to rescue Princess Daphne. Now the second half of the Dragon's Lair coin-op has been coded and you can finish the task. The game begins with you deep in Singe's castle; the hideous dragon has hidden Daphne deep in the Castle's catacombs. Watching over her are a whole host of monsters, traps and - worst of all - the Evil Shapeshifter.

While Escape is the prequel to Space Ace (58%, Issue 59), it's the most recent to be converted and has many advances over Ace. Due to the spectacular set-piece graphics the main character still had a limited number of actions per scene, e.g. 'jump left and fire' to be performed at just the right moments. There's only one way to do things - mistime your actions and you lose a life. But unlike Ace, there's a 'Helper' option where arrows appear on-screen showing you what moves to make (until you get near the end). These moves are not always the same and can change from game to game. There's also a 'Flipping' option, which improves lastability by forcing you to play most rooms twice, their order random with many shown mirrored. There are also three difficulty levels; 'easy' meaning there are less scenes to beat. Even more impressive, Dragon's Lair Part 1 can be linked to its sequel so you can play the whole coin-op - complete with 'Helper arrows on the first part, as well!

If you don't have a 1Mb machine you lose sound, and can choose to drop birth/death sequences to save disk accessing. You can still save the game though. 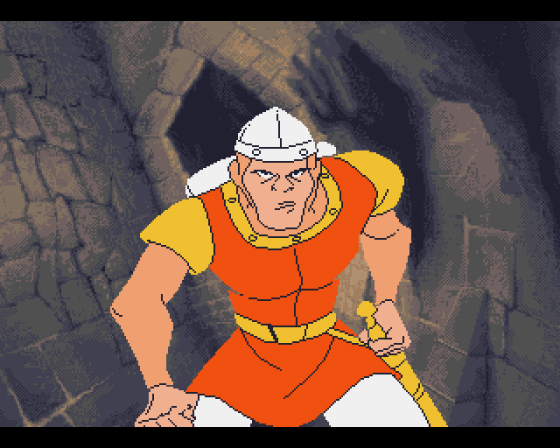 Was it really a mere two issues ago that Space Ace had me blowing a circuit over its irritating lack of playability? Singe is a massive leap forward, the 'helper' arrows making gameplay more a matter of timing than maddening hit-and-miss experimentation. This gives the game a much more flowing, satisfying feel. As for the graphics, they're as good as you'd expect: fast, imaginative and full of humour!

Sound is the ideal accompaniment - plenty of great spot FX. This means there's no less than five disks, and on quite a few scenes death means a brief pause for reloading it, but this really is quite a good game.

Still not worth £45 perhaps, but good fun and essential for owners of the original. 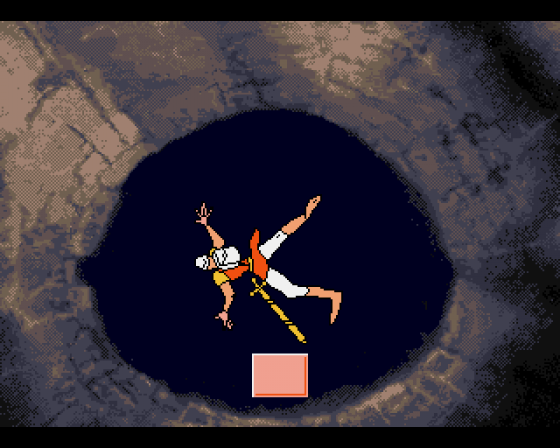 Singe may only contain eleven 'scenes', but most of these include two or more screens and often repeat - as in the labyrinth - to create the impression of a substantial challenge. What's more, rooms can be mirrored (even if you don't choose the 'Flip' option), forcing you to reverse your actions.

To begin with, graphics are almost irrelevant; you just watch the arrows. But once you get the hang of it, you begin to appreciate the presentation more. The huge cartoon graphics really are superb with an atmospheric soundtrack to match.

Overall, Singe is a definite improvement over the frustrating Space Ace, although juggling five disks is a bind and the £45 price tag is well over the top.

Presentation 90%
Hard drive installation program, option to link in Lair Part 1, save option, and much more besides. Apart from inevitable disk swapping, excellent.

Lastability 56%
Difficulty levels, option to double number of rooms, and Part 1 expansion offer some challenge, although a few days intensive play should see it beaten.

Overall 71%
Over-priced, but graphics and sonics are great, while gameplay is fun. 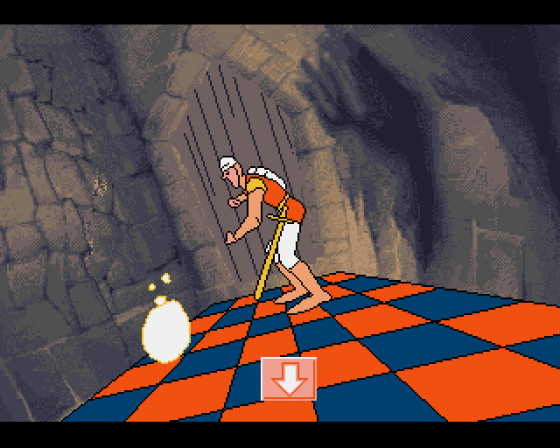