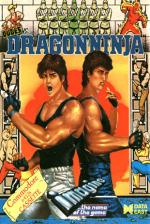 Well, what a coincidence! What have we here but just the very thing! Dragon Ninja places you in the role of a tough streetwise martial arts expert. Armed only with a pair of designer sports shoes and your fists, you venture forth into the thug-ridden streets bashing the baddy guys to bits.

Whilst on your vigilante trek, just after you've duffed up a fat, fire-breathing gang-leader, you spot some suspicious looking characters bundling the president into a car and speeding off into the distance. Leaping onto the back of a passing truck, you give chase. Unluckily, you just happen to have leaped onto the back of the Bad Guys' gang truck. Oh dear...

Well, you're dead 'ard and can pick up knives and fings and use your super punch power to beat up... say... a warrior wearing Wolverine claws. Oh, here comes one now...

They've done it again! Ocean have got a major licence and come up with a cracking game. This time it's under the Imagine logo, but it's the same programming expertise (including Steve Wahid and Jonathan Dunn) that has been put to good use.

The basic action is much like many other martial arts games, but there are a few nice touches, such as the effective scrolling truck section, and the gameplay is fast and appealing.

I'm not that conversant with the arcade version, but if it's as playable as this I can see a few ten pences going astray!

Another great Ocean/Imagine game. How do they do it... and keep doing it?!

I found something appealing about the arcade version of Dragon Nina that many of the other games of the type were lacking. I can't quite place what it was, but Imagine's programmers have managed to capture it in their conversion.

The graphics are very nice, with crisp definition and animation, but for some reason they go a bit funny colours (local expression) on the second section. My only real gripes are the lack of inter-screen presentation, decent sound and a two player option, making it (in my opinion) not quite good enough to be a Sizzler.

Still, I played it for a while so that I could review it properly... OK, so I wanted to play it lots! It's an addictive and playable game, so take a look!

Presentation 62%
Good overall appearance, but not much in the way of real presentation (intermissions and the like).

Sound 69%
A decent title tune, but the in-game sound flounders a bit.

Hookability 91%
Great fun from the first punch and not just because of the arcade name.

Lastability 86%
Starts off easy but gets hard... very hard!

Overall 87%
A great game and a not half bad conversion job. Ocean/Imagine sure have got their act together!

A great game and a not half bad conversion job. Starts off easy but gets hard.