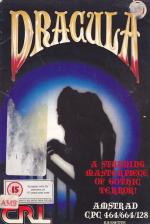 This three-part "stunning masterpiece of gothic terror" comes to you courtesy of Rod Pike who was responsible for an earlier CRL title, The Pilgrim. The big deal here is that (Heaven knows how!) CRL has managed to get the British Board of Film Censors to slap a "15" certificate on the game - which means that anyone under 15 can't buy it.

Frankly, my immediate response here is that all the "15" certificate means is that anyone under 15 is going to end up saving money for better things. If, however, you're over 15 and able to waste £8, here's what you get...

The game comes on two cassettes and is split into three parts - called The First Night, Arrival and The Hunt. The storyline as a whole follows Bram Stoker's original book fairly closely - a British solicitor is summoned to Castle Dracula to arrange for the transport of some soil from there to the UK, where a newly purchased house awaits it. On the way he stops at an inn (The First Night) where he has some nasty dreams before making the journey to the castle - from which he must later escape (The Arrival).

Later Drac arrives in Blighty and gets biting, with the usual macabre side effects, until the forces of Good prevail... which all takes place in The Hunt.

The text descriptions in the game are long and vivid, though there are very few locations - part one for example, has only six! Occasional nasty pics flash up on the screen, which are meant to have anyone under 15 screaming with terror. They're not really that gruesome - and even less so when seen on a green screen! Nor are there very many of them. I counted about ten in all and although I may not have seen them all I doubt there are many more.

The text and the pics, however, are okay as far as they go - if a little limited. But the rest of the game is pretty diabolical and I mean diabolically bad, not diabolically evil!

First, the parser. This can cope with only two words and even then refuses to do basic things like tell you which word it doesn't understand. Instead, it's back to the prehistoric "You can't do that!" and "I don't understand" responses when the program doesn't get what it wants.

This unhelpful attitude is sometimes misleading. For example, if you enter "PUT KEY ROUND NECK", the program answers "I have done that" when in fact all it has done is drop the key (PUT being taken as synonymous with DROP, and only two words scanned). At other times, it's just annoying if you have a key to a door, you expect to be able to open it - even if it's closed and locked. However, Dracula is one of those old-style programs that tries to make a big puzzle out of opening doors so first you have to UNLOCK DOOR, then you have to OPEN DOOR, and then go through it. After a while this sort of thing gets rather dull - though, to be fair on Dracula, a number of other programs still insist on this tedious process.

Other examples of parsing ineptitude are understanding the input "STOP COACH" as meaning "QUIT"...! Or saying "I do not have a source of ignition" when asked to light a lamp whilst you're carrying a match. The answer in the latter case is that you have to "STRIKE MATCH" first - but I don't think the program was being very clever there.

Nor is it clever when right at the beginning you are confronted by an angry coachman. Your obvious ploy is to pay him for the journey, but a quick INVENTORY reveals that you are carrying nothing of interest. However, you must presumably have money, because typing "PAY COACHMAN" sends him happily on his way and money, I would suggest, is "of interest" if it is used to solve a puzzle (albeit a weak one)!

The text descriptions in this game are sometimes very good - scary even, if you're of a nervous disposition. And some of the pics (full screen size) are good too. But as an adventure game produced at the end of 1986, it is frankly appalling. I remember playing games in 1983 that were better programmed than Dracula and I am totally baffled at CRL's decision to market it. No wonder people wonder what adventuring's all about if they get landed with stuff like this. A fervent sign of the cross should be made at anyone trying to flog you a copy.

Appalling. I remember playing games in 1983 that were better programmed than this and I am totally baffled at CRL's decision to market it.