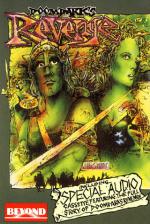 Following on the heels of the highly successful Lords of Midnight, Beyond have released that epic game's successor. Larger than the original that inspired it, this game boasts 6144 locations, 48000 screen views, 128 characters and as many objects to collect. The game is set during the period after the destruction of the Ice Crown and all that it stood for by the young hero, Morkin. He meets Tathirel the Fey, daughter of the Lord of Dreams and falls in love with her. Arrangements are made for their wedding.

However, a new force of evil is afoot. Shareth the Heartstealer, daughter of Doomdark and Empress of the Frozen Empire kidnaps young Morkin in an attempt to eliminate Luxor and bring about the destruction of the land of Icemark, which lies to the north of the Land of Midnight. Enough of all these capitals. Suffice to say that your quest is to guide the forces of good to victory over this evil cradle snatcher.

For those three or four people unfamiliar with the layout of these games, play is totally keyboard controlled. You may see through the eyes of Luxor, Tarithel, Rorthron or Morkin himself (but only once he has been freed from Shareth). Single keypresses can select a different viewpoint, move the selected character to a new location, select a new character to play or examine situations, armies and people and choose between listed options when various situations arise.

The idea is that by guiding characters and armies to the right places at the right time, a victory over the enemy may be incurred. Thus the game is a hybrid of adventure and strategy. Screens are a mixture of text and graphic displays. The text is a neatly defined 'American Uncial' style script, whilst the graphics take the form of simplistic but effective four colour views of local terrain and any distinguishing features. This simplicity is far from surprising considering the number of locations and viewpoints crammed into the program.

One of the more interesting aspects of presentation is that whilst a well presented instruction booklet is supplied to teach you the mechanics of the game, you have to listen to a specially recorded audio cassette to fully understand the plot. The cassette is prepared rather like a radio show, with narrator, main characters, a few sound effects and incidental music played on synthesizers. To tell you the truth, it's all rather amusing. The narrator reminds me of a televised satire on Shakespeare which was full of 'Twas a dark, dark night, that cold and dark night. Dark and cold it was...' Everything is 'dark of hue' instead of black or 'soft of melody' instead of wimpish. Good, atmospheric stuff, eh? The narrator sounds like a Spitting Image Lawrence Olivier (shame about the lack of a Gielgud sound-alike though). This is fun. I've always wanted to write record reviews.

Rich string sounds ooze through the eight track with all the atmospheric authenticity of a Fender Stratocaster screeching through a primordial mist. The characters come from the Awwfully Jolly School Of Acting and sound as if their involvement with the tape has been slotted in between addressing Young Aristocrats Against Work and a good night at Stringfellow's. Prize for most sincere performance must, however, go to the anonymous creature who introduces each new chapter in the story. His voice constantly threatens to induce catatonia in the listener. It's totally devoid of enthusiasm, character or anything else for that matter. Great fun.

But back to the game. Once you've suffered through the tape, you can get down to playing what soon appears to be a compulsive game. Whilst any particular location might not be that interesting, the sheer scope of the game soon comes over and the difficulty of the situation becomes evident. No doubt a good deal of book keeping is necessary if all four characters are to be used to the best advantage.

The sophistication of the plot is a considerable improvement on Lords of Midnight. Whole armies exist for you to convince of the just cause facing your forces and responses are always unpredictable. The despicable Shareth will be trying to lure them to her side in order to bring about the early demise of your forces, so beware. The characteristics of these armies' leaders are also varied. Even if they agree to join you, they may turn out to be cowardly, treacherous or perhaps show a modicum of intelligence or bravery. Only trial and error will reveal who are worthy allies.

These features add depth and tension to a well devised backdrop; do you approach an unknown force, knowing that if it chooses to attack you, your forces may well be caught off guard? Can you risk making too many enemies? The nature of this epic venture is such that only considered and varied play will bring about a full victory. Victory itself may be achieved to different degrees. The simplest victory is that of the freeing of Morkin. Greater victories result from bringing more characters safely back to the Gates of Varenorn. Shareth wins the game outright if she kills Luxor. With his death, all is lost. If Morkin dies, Luxor's strength will diminish because of the grief for his loss. The only chance for victory will then be to destroy Shareth for good. How to do this remains to be discovered, but it is possible.

Doomdark's Revenge is a worthy successor to the cleverly devised Lords of Midnight and is a must for fans of the original, despite the gimmicky and pretentious (but funny) story on tape. The inclusion of a save game feature was a wise move, and to take both cassette and disk users into account was better yet. Mike Singleton should be justly proud of a truly epic series of games. What the game lacks in aesthetics, it more than makes up for in terms of depth, playability and atmosphere. Better yet, the game stands on its own feet. There's nothing to be gained from having played the original except knowledge of the bare game mechanics, and those are easy enough to pick up. Treat yourself to this game and begin your own saga - but beware of the night!!

Presentation 87%
Pretty good. Shame about the gimmicky tape though.

Graphics 60%
Necessarily mediocre. Not a reflection on the game's overall quality.

Instructions 90%
Everything you could want to know about playing but never dared to ask.

Authenticity 93%
Characters respond according to the dictates of the environment. Atmospheric and realistic play results from this well thought out aspect of the game.

Playability 96%
Even if you're on the wrong track, the freedom for experimentation is another one of the game's strong points.

Value For Money 95%
Oodles of game for the price.

Overall 95%
An addictive and compelling episode to a great saga.

An addictive and compelling episode to a great saga.