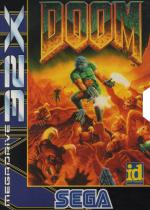 You don't hear anything. Just the sound of your panting breath. It is your panting breath, isn't it? You don't see much. It's a dark corridor, with stuttering flashes of neon light, cast from recesses above. The base is in a state of ongoing disrespair. No-one to change the lightbulbs you see. They've all been eaten.

Now you know that something else is close by. There's something else becauses the pounding of your own heart - something else's hunger. How fortunate that you're carrying a shotgun. Of course, you'd prefer it to be a pulse blaster, but in the circumstances you feel it would be ungrateful to complain. Anyway, you just found a box of cartridges, so if you're going then quite a few are going with you. How did the Mars base get into this mess? From the carnage you see it seems to be a place in the pit of Hell, bot the depths of space. Flitting throughts of tortured corpses makes the hairs stand out on your neck. And in that area of your body, you are suddenly aware of a pleasant sensation, like the slow, gentle stroke of a long, sharp fingernail...

Created and converted by iD software, whose 3D killer shenanigans commenced with Wolfenstein.

Take out all enemy lifeforms, space cadet. Kill, kill them all!

Of the initial excursions provided for 32X buyers, Doom is a while-knuckle roller-coaster ride of a game. You start with a flimsy pistol and a few rounds, and the imperative of reaching an exit located on each of the seventeen 3D levels; any of the first fifteen can be accessed from the options screen, but the latter two await anyone who ploughs through from start to finish.

Your view is first-person perspective, and you'll soon discover its possible to spin round sharply, edge forward or plough on. Though the game appears as unsophisticated carnage to the uninitiated, real Doom-ers learn tactics the hard way by pacing the levels, laying ambushes, finding sheltered positions, memorising the mazes. Only then will you be ready to tackle the next of five difficulty levels.

Secrets abound in Doom, many of them so innocuous as to be missed on your initial panic-striken progress. But search out suspicious landscape features and you come across short-cuts, stashes of ammo and energy and new weapons. One dubious "improvement" on the PC version is the more conspicuous marking of some of these areas.

The creatures you will encounter won't be pacified with tea and a visit from their social worker. Death is the only decent therapy. To offer this service you require the right tools. Never blame them:

As you rush headlong, always keep the comforting orange glow of the exit door in your mind. Some may not be as easy to find as you'd hoped. Most blast doors will open easily (what lurks behind?) but some are key coded and force you on a detour. Switches operate hidden passages and even some exits may not be all that they appear.

Some ground areas are flooded with hazardous residue. Cross them and you can feel your life ebbing away. However, armour provides effective though short-lived protection from these effects. Beware the many drums of volatile chemicals littered around, liable to explode with a single shot. An effect which even has some uses...

Yes, it may only have seventeen stages, and yes the game window is a little smaller, but you can never take Doom's sheer playability away from it.

Never before has a game conjured such an oppressive atmosphere. As the player bounds across a series of detailed corridors and stairways, there's never any way of knowing what's coming around the corner, and this adds a feeling of tension you won't encounter for quite a while.

The basic premise of the game - i.e. shooting and chopping up a host of demons - is simple enough, but it is Doom's execution that makes it excel. The 3D is simply stunning, the graphics varied and suitably murky, and the action is unrelenting.

A stunning game, Doom really puts the 32X through its paces.

The true test of the 32X is whether it offers gameplay and game spectacle beyond that which the Megadrive can. Despite its minor faults, Doom is an undeniable endorsement of that very principle. It's a magnificent concept in game and brilliant in its execution. Atmosphere by the bucketload, created by the amazing solidity of the graphics, and the sensory tingle of the sampled sound - suggestive of horror like all the best horror movies.

That's what Doom is - more of an interactive horror movie than the likes of Night Trap and Mystery Mansion could ever be, because it recreates the sensations of excitement and exhiliration that a well-paced slasher flick bring out.

When did a video game last do that for you? This is the title you will miss not having the most this Christmas - unless of course you do as we say...

Graphics 93%
P. Dingy corridors packed with detail - and some of the most imaginative monsters you're likely to see.

Sound 90% P. Perfect. As you run about you can hear your on-screen character panting, and the assorted weapon and monster effects are incredible.

Lastability 92%
P. It'll take ages to plough through to the final two stages.
N. Surely a few more stages could have been squeezed in?

Value For Money 92%
P. The price has yet to be determined, but make sure this is one of the games you redeem your money-off vouchers with.

Overall 92%
Forget Zero Tolerance, forget Bloodshot. The ultimate 3D shoot-'em-up has arrived. The Megadrive will never be the same again...

Forget Zero Tolerance, forget Bloodshot. The ultimate 3D shoot-'em-up has arrived. The Megadrive will never be the same again.