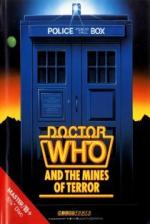 Remember Castle Quest? It turned out to be a smash hit and deservedly so. Ever since its debut, Micro Power has been waffling on about a sequel best seller based on the exploits of Dr. Who. Every games player has been eagerly awaiting its arrival and when it finally arrived in the A&B office, I grabbed it.

This is the first game I've seen on a ROM (it is partly on disc/tape with the bulk of the game on ROM). As with all these new mega games, it comes with lots of bumpf including an instruction booklet which caters for Speccy, Amstrad and C64 as well as the BBC in several different languages. But onto the game itself.

I booted the disc to be greeted by a rather gruesome picture of the Doctor (Colin Baker) after which you can start the game. As with Castle Quest, you control a figure searching a system of corridors - an extremely large set of corridors in this case! Your objective is to stop the mining of heatonite, regain a memory capsule and disable TIRU, a massive time machine. To aid you in your mission, you have an object called a splinx which can be programmed to do various things such as follow the Doctor, pick up or drop an object by means of single letter instructions - a very neat and original idea. Suffice to say, there are lots of devious puzzles to solve and I have not got very far. This was not helped by the fact that you are forced to save your current position on tape - even with the disc version!

So what do I actually think of the game? I was disappointed by the poor graphics, minimal sound, jerky scrolling, lack of speed, exasperating amount of irrelevant waffle in the instruction book and many other niggly bits I won't bother to mention. However, perhaps Dr. Who should not be regarded as an arcade style game as such - it's more of an adventure game with animated graphics. As an adventure, you should find it frustratingly compulsive. But what disturbs me most about this game is its price. I would be interested to know how many people would be willing to spend nearly £20 on a single game.

A startling loading screen... and an adventure game with animated graphics. What disturbs me most about this game is its price... £20 for a single game?