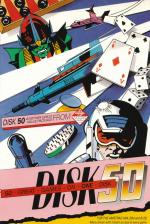 The trouble with releasing vast amounts of games for a relatively cheap sum of money is that everybody thinks they must be a load of rubbish.

So what do you make of 50 games on an Amstrad disk for just £9.95? Well, the truth is that most of these games are not exactly gems. It's doubtful if any of them would ever see the light of day individually. However, when they are all lumped together in one package, they don't seem too bad.

Cascade has done the sensible thing and highlighted what it believes to be the best games in the collection. These include Backgammon, 3D Maze and 3 Card Brag.

Perhaps the best is Nemesis IV, a counter and board game. The basic aim is to fill up most of the squares with your counter 'rather than your opponent'. It's simple, straightforward and quite good fun to play.

There's no real point in marking every game individually so the following marks apply to the overall package.

None of these games are really gems, although Backgammon is quite good. When all is said and done, £9.95 for 50 games is extremely good value.