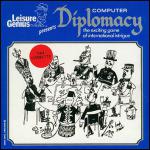 Aaaahhh, memories. Yea, I remember, doing History A-level all those years ago. Then staying after class on Thursdays with the lecturer and four or five others to play the Diplomacy board game way into the wee hours. A game where friends ended up bitter enemies, names were called and fists flew - all because one treacherous swine had sneaked in the back door and pinched one chap's territory when the other guy thought he had a rock-solid treaty. Fun?

Aye, we used to make our own fun in those days (strains of Hovis advert music) not like now wi'ya new-fangled computer things and Virgin's computerised version of the classic. So how has the board game translated to the wonders of the C64?

Coming on a solitary disk, Diplomacy tells a story as old as time. You, of course, wish to rule the world. But to win you do not only rely on force. You will need to force and break treaties, threaten countries, create non-aggression pacts. In short, be a typical politician - be nice when it suits you, like through your teeth when necessary and stab a few backs when the chance comes for a few rich pickings.

After loading you can choose from two to seven players, any of which can be computer- or player-controlled. After that you select the computer player's difficulty level. Intriguingly, you can also choose to have a time limit on each player's moves. I never played the board game with one and never found the need for one with other players as they were much too eager to get on with the game.

I suppose that the possibility may arise that some players may take a while in discussion with other players formulating a treaty - or spreading disinformation by making it look like he's arranging a treaty, or... well you get my drift. So a handy option if time is short.

The design of the game is of a high standard. All of the menus are logical while not being cluttered and, most importantly, you are given plenty of chances to back out of any hasty or accidental decisions.

After selecting the View Map option you will be transported to a simple graphic of pre-WW1 Europe. Each country, and sea, shown is divided up into a variety of areas. To win the game you must conquer a set number of these areas. Within the map section you can view where your troops or fleets lie and what territory you own.

As well as taking a gander at the last few moves made by all concerned you can also request reports on the military and political situation. A further option allows you to conduct the essential talks needed to win. After all, who can afford to attack one country with a second or third breathing down his neck? - ask Hitler about the wisdom of that move.

When you conduct talks with a particular country you are able to give a friendly greeting, abusive insults, threatening gestures, spread rumours or request military aid. The Issue Treaties option takes you one step further whereby you select the type of treaty you want. Later on your ambassador will report on your success, or lack of it. Incidenly, any computer player set on the 'hard' difficulty level will give you the cold shoulder if you attack and then, later, offer an alliance.

Orders include moving, staying put and supporting another unit's move. This support is essential at times because if another unit from an opposing country wishes to move into the same area the country with the most supporting units wins.

The convoy order is a nifty time saver. Basically, troops can leapfrog over a stretch of water to another land-mass if they have a fleet (or another country's co-operating fleets) on that body of water. At the end of the turn, new units can be built on supply centres - thus you move, hither and thither - throughout the land.

Virgin's Diplomacy is a good interpretation of the board game and is especially useful for solitaire play. For games with groups of 'humans' the computer game fails in comparison to the board game which offers better presentation and a less cramped atmosphere produced by seven people huddled around a TV/monitor. However, that is not to say that computer Diplomacy is unplayable during multi-player human games - far from it.

The computer opponents are mostly lacking in challenge, even on the hardest level. However, this is to be expected when matched against the deviousness of the human brain. In addition, the game plays commendably fast. So, any increase in computer AI would slow the whole thing down dramatically.

Recommended for solitaire play, Virgin's Diplomacy can still be used for live games, but you must be aware of its inherent limitations.

A good interpretation of the board game and is especially useful for solitaire play.