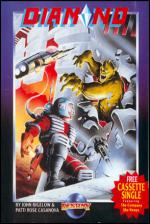 One night, on the surface of the far off planet of Zan, two wandering lovers were out strolling. As they gazed heavenwards, dreaming to themselves, they noticed a small group of stars that seemed brighter than the rest. Or was it that they were closer than the rest?

The truth of the matter was that they were not stars at all, but a fleet of ships almost forgotten to the people of Zan by the passing of time.

Long ago, a state of unrest existed between the Zan population and neighbouring Zia. During the conflict a great number of prisoners were taken and incarcerated in huge prison ships, set to fly in a distant orbit, out of the way of the people. Now these prison ships have returned...

On board the ship themselves, certain changes have occurred. The inhabitants' descendents have been mutated by strange radiation and have decided to break out of their confinement by smashing through the hulls.

In Diamond, you take the part of a lawman/ship repairer, who must manipulate five droids over the hulls via remote control. These droids can take on any of four forms, each suited to the task in hand (repairing holes, collecting energy, shooting mutants or defending the main droid brain by putting up a shield). The score ticks down as the aliens escape, the game ending when it reaches zero.

As we received the disk version of Diamond here at Zzap!, I haven't heard the songs by The Company She Keeps on the cassette's B-side, but never having heard the band's music, I can only hope it's a lot better than the game.

A nondescript single-colour rounded sprite is guided (sometimes) over what at best can be described as a poorly defined mothership background, to perform a task rendered impossible by woefully inadequate instructions and game controls.

Greens, pinks, browns and yellows all vie for position in a crudely stipple-ahded, visually obscene mass, and instantaneously annoying beeps drone away in the background in vague relation to what's happening on the screen (i.e. very little of consequence). Diamonds are a gamesplayer's worst enemy.

Diamond could have been a good game if the programmers had set their minds to it - after all, the gameplan is quite sound, containing blasting, searching and strategic elements - but as it is it just doesn't have what it takes.

The graphics are weedy and inneffectual, the sound is unmemorable and the gameplay... well... what gameplay? The instructions (Spectrum ones for the Commodore, I might add) are totally unhelpful, with an incredibly misleading guide to the droids' functions.

There is almost no interaction between the machine and the player, which leaves you eeling lost and frustrated. Well, since the scenario is set in another Solar System and therefore has no bearing on my lifestyle, I can peacefully ignore the whole thing.

Hookability 26%
Frustratingly difficult from the kick-off.

Lastability 14%
Nothing to grab the imagination for more than five minutes.

Overall 22%
Diamond it may be, but a gem it certainly ain't.

Diamond it may be, but a gem it certainly ain't.