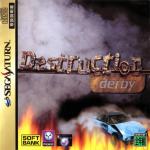 Destruction Derby is the closest thing to a drive-'em-up you are going to see on the Sega Saturn this year. Racing your clapped-out saloon is almost incidental to forcing ther cars into the crash barriers lining the dirt tracks laid out in five vaguely American locations.

Saturn owners are hardly begging for racing games, with a steady stream since Daytona last year, from the serious (Sega Rally, Wipeout) to the silly (Road Rash, Street Racer) and now something in-between.

One of the first PSX titles by Psygnosis converted by Saturn Wipeout team, Perfect Entertainment.

Take the line in stock car races, whilst beating the living daylights out of nineteen opponent cars.

Some of the course layouts make you play the automobile equivalent of chicken, as the layout intersects itself. This makes it all too easy to collide with traffic coming from a right angle, sending you careering down the wrong path.

Although this is virtually unavoidable, the crashes look excellent.

The replay feature is very watchable, as it lets you construct a set of custom viewing angles from which to review a race/derby. It's very easy to use and not time-consuming to set up an awesome sequence. There's no screen litter of scores or times either.

Metal grinds against metal - the damage is permanent. Taking first place in a Destruction Derby race is only half of it. Another way to score points is to force other cars out of the race. Heavy impacts are rewarded with 'Race Points' with a minor nudge getting a couple of points and full 360 degree spins taking a whopping eight. A diagram in the bottom right shows damage points around your car. It is possible to get hauled out of the race for sustaining too much damage.

Not really a race but a fight to the death. The twenty cars have a massed motor rumble in a 'bowl' arena - a Destruction Derby. The secret for high points and good placings is to spread the damage around your car and survive as long as possible.

Squeezing twenty cars onto tracks this narrow is a recipe for gridlock.

The pile-ups look great, but can take you out of contention if you get stuck in the centre.

I'm starting to wonder whether these Saturn Psygnosis conversions are such a good idea after all. Games like Wipeout and Destruction Derby were designed to show off the PlayStation hardware, and with a substandard conversion like this, it does the inverse for the Saturn.

That said, Destruction Derby was never a brilliant game in the first place. Sure, smashing other cars up is fun for a while, but the limited game mechanics and narrow tracks keep the game moving at a snail's pace when compared to 'legit' racers like Sega Rally.

My advice: wait for Daytona CCE. It's going to be hot!

I was hoping for a conversion of the standard of Wipeout, but for whatever reason, Destruction Derby falls short. The original game had some shortcomings in the longevity department, and was all a bit flat.

That said, the nature of the game is different to most other races and the physics which make the cars crash so spectacularly must be very clever.

I also had a fair amount of fun with the Derby and replay options. The most obvious weakness is the graphics - appalling clipping, occasional jerkiness and slowdown and regular glitching make this fall well below the cosmetic standard of most Saturn games.

Graphics 76%
P. The cars are nice, and there's lots going on in any race.
N. Low resolution and blocky backgrounds.

Effects 74%
P. The characters' exclamations are funny.
N. The commentator is repetitive. No good smashing noises.

Lastability 70%
P. The Derby is always good for a laugh.
N. Once you have the measure of the race, its challenge and appeal wanes.

Overall 69%
An immaculate conversion might have made this a contender. But with the company it keeps, it's just an also-ran.

An immaculate conversion might have made this a contender. But compared to other racers, it's just an also-ran.