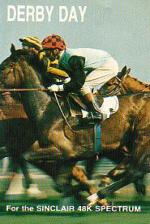 I have to admit that when I first saw the title of this program I didn't exactly jump for joy; in fact, the thought of looking at another horse race program decidedly made my heart sink. Surely anybody can make three blobs race from one side of the screen to the other?

When I had recovered, I decided to take a risk and load it up. Derby Day takes well over the standard 16K of memory, so it took a little while to load, though it did load, and first go and all! The first screen of the game asks you what sort of punter you are... out for fun to deadly serious. Having pressed the key, I was pleasantly surprised to see a well-designed and colourful dispplay fold out on to the screen. It included a very good picture of 'honest Clive', the bookmaker, which, though it is not three-dimensional still came over very well. A nice extra touch is a horse trotting across the top of the screen just above 'honest Clive'. (I wonder what Uncle Clive would think?) When everybody has placed their bets (the game can accommodate anything from 1 to 5 players) the race begins...

Instead of just having the horses galloping across the screen, which they do do very well, the race course is also seen to be moving past them, hence making the track rather longer. One of the many nice touches is the fact that you can see little people standing at the side of the track, and when you come near to the finish the grandstand comes into view. The graphics, though not particularly fast or record-breaking, are well designed and nicely arranged. Sound has also been used reasonably well. Though this game seems to have been written almost entirely in Basic, it has been structured to allow for reasonably good speed. Who wants race horses that are so fast that you can't see them anyway? It might have been a little more exciting if there had been fences so that the horses might fall, but it is still great fun. When the program is running, the display is so arranged that it is difficult to miss.

Computer Rentals Ltd seem to be relatively new to the home computer software market, but obviously have reasonably good financial backing to place their good-sized adverts. They also supply a program called Galactic Patrol for the 16K ZX81, some other games for the Spectrum, plus a few for the Dragon 32. If their other games are as good as Derby Day then they would definitely be worth thinking about.

So, to conclude, it can be said that the programmer has done a good job, especially considering the subject matter, and they have come up with a pretty good value-for-money cassette for the person who wants a quieter life than defending the world from aliens.

The programmer has done a good job and... come up with a pretty good value-for-money cassette for the person who wants a quieter life than defending the world from aliens.